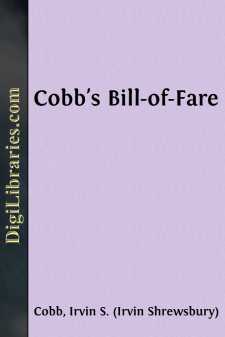 Upon a certain gladsome occasion a certain man went into a certain restaurant in a certain large city, being imbued with the idea that he desired a certain kind of food. Expense was with him no object. The coming of the holidays had turned his thoughts backward to the care-free days of boyhood and he longed for the holidaying provender of his youth with a longing that was as wide as a river and as deep as a well.

"Me, I have tried it all," he said to himself. "I have been down the line on this eating proposition from alphabet soup to animal crackers. I know the whole thing, from the nine-dollar, nine-course banquet, with every course bathed freely in the same kind of sauce and tasting exactly like all the other courses, to the quick lunch, where the only difference between clear soup and beef broth is that if you want the beef broth the waiter sticks his thumb into the clear soup and brings it along.

"I have feasted copiously at grand hotels where they charge you corkage on your own hot-water bottle, and I have dallied frugally with the forty-cent table d'hote with wine, when the victuals were the product of the well-known Sam Brothers—Flot and Jet—and the wine tasted like the stuff that was left over from graining the woodwork for a mahogany finish.

"I NOW GREATLY DESIRE TO EAT SOME REGULAR FOOD."

"I now greatly desire to eat some regular food, and if such a thing be humanly possible I should also prefer to eat it in silence unbroken except by the noises I make myself. I have eaten meals backed up so close to the orchestra that the leader and I were practically wearing the same pair of suspenders. I have been howled at by a troupe of Sicilian brigands armed with their national weapons—the garlic and the guitar. I have been tortured by mechanical pianos and automatic melodeons, and I crave quiet. But in any event I want food. I cannot spare the time to travel nine hundred miles to get it, and I must, therefore, take a chance here."

So, as above stated, he entered this certain restaurant and seated himself; and as soon as the Hungarian string band had desisted from playing an Italian air orchestrated by a German composer he got the attention of an omnibus, who was Greek, and the bus enlisted the assistance of a side waiter, he being French, and the side waiter in time brought to him the head waiter, regarding whom I violate no confidence in stating that he was Swiss. The man I have been quoting then drew from his pockets a number of bank notes and piled them up slowly, one by one, alongside his plate. Beholding the denominations of these bills the head waiter with difficulty restrained himself from kissing the hungry man upon the bald spot on his head. The sight of a large bill invariably quickens the better nature of a head waiter.

"Now, then," said the enhungered one, "I would have speech with you. I desire food—food suitable for a free-born American stomach on such a day as this. No, you needn't wave that menu at me. I can shut my eyes and remember the words and music of every menu that ever was printed. I don't know what half of it means because I am no court interpreter, but I can remember it. I can sing it, and if I had my clarinet here I could play it. Heave the menu over the side of the boat and listen to me. What I want is just plain food—food like mother used to make and mother's fair-haired boy used to eat. We will start off with turkey—turkey a la America, understand; turkey that is all to the Hail Columbia, Happy Land....