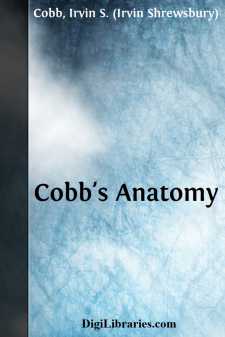 Dr. Woods Hutchinson says that fat people are happier than other people. How does Dr. Woods Hutchinson know? Did he ever have to leave the two top buttons of his vest unfastened on account of his extra chins? Has the pressure from within against the waistband where the watchfob is located ever been so great in his case that he had partially to undress himself to find out what time it was? Does he have to take the tailor's word for it that his trousers need pressing?

He does not. And that sort of a remark is only what might be expected from any person upward of seven feet tall and weighing about ninety-eight pounds with his heavy underwear on. I shall freely take Dr. Woods Hutchinson's statements on the joys and ills of the thin. But when he undertakes to tell me that fat people are happier than thin people, it is only hearsay evidence with him and decline to accept his statements unchallenged. He is going outside of his class. He is, as you might say, no more than an innocent bystander. Whereas I am a qualified authority.

I will admit that at one stage of my life, I regarded fleshiness as a desirable asset. The incident came about in this way. There was a circus showing in our town and a number of us proposed to attend it. It was one of those one-ring, ten-cent circuses that used to go about over the country, and it is my present recollection that all of us had funds laid by sufficient to buy tickets; but if we could procure admission in the regular way we felt it would be a sinful waste of money to pay our way in.

With this idea in mind we went scouting round back of the main tent to a comparatively secluded spot, and there we found a place where the canvas side-wall lifted clear of the earth for a matter of four or five inches. We held an informal caucus to decide who should should go first. The honor lay between two of us—between the present writer, who was reasonably skinny, and another boy, named Thompson, who was even skinnier. He won, as the saying is, on form. It was decided by practically a unanimous vote, he alone dissenting, that he should crawl under and see how the land lay inside. If everything was all right he would make it known by certain signals and we would then follow, one by one.

Two of us lifted the canvas very gently and this Thompson boy started to wriggle under. He was about halfway in when—zip!—like a flash he bodily vanished. He was gone, leaving only the marks where his toes had gouged the soil. Startled, we looked at one another. There was something peculiar about this. Here was a boy who had started into a circus tent in a circumspect, indeed, a highly cautious manner, and then finished the trip with undue and sudden precipitancy. It was more than peculiar—it bordered upon the uncanny. It was sinister. Without a word having been spoken we decided to go away from there.

Wearing expressions of intense unconcern and sterling innocence upon our young faces we did go away from there and drifted back in the general direction of the main entrance....