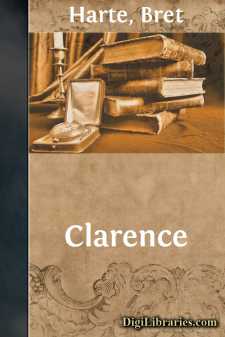 As Clarence Brant, President of the Robles Land Company, and husband of the rich widow of John Peyton, of the Robles Ranche, mingled with the outgoing audience of the Cosmopolitan Theatre, at San Francisco, he elicited the usual smiling nods and recognition due to his good looks and good fortune. But as he hurriedly slipped through the still lingering winter's rain into the smart coupe that was awaiting him, and gave the order "Home," the word struck him with a peculiarly ironical significance. His home was a handsome one, and lacked nothing in appointment and comfort, but he had gone to the theatre to evade its hollow loneliness. Nor was it because his wife was not there, for he had a miserable consciousness that her temporary absence had nothing to do with his homelessness. The distraction of the theatre over, that dull, vague, but aching sense of loneliness which was daily growing upon him returned with greater vigor.

He leaned back in the coupe and gloomily reflected.

He had been married scarcely a year, yet even in the illusions of the honeymoon the woman, older than himself, and the widow of his old patron, had half unconsciously reasserted herself, and slipped back into the domination of her old position. It was at first pleasant enough,—this half-maternal protectorate which is apt to mingle even with the affections of younger women,—and Clarence, in his easy, half-feminine intuition of the sex, yielded, as the strong are apt to yield, through the very consciousness of their own superiority. But this is a quality the weaker are not apt to recognize, and the woman who has once tasted equal power with her husband not only does not easily relegate it, but even makes its continuance a test of the affections. The usual triumphant feminine conclusion, "Then you no longer love me," had in Clarence's brief experience gone even further and reached its inscrutable climax, "Then I no longer love you," although shown only in a momentary hardening of the eye and voice. And added to this was his sudden, but confused remembrance that he had seen that eye and heard that voice in marital altercation during Judge Peyton's life, and that he himself, her boy partisan, had sympathized with her. Yet, strange to say, this had given him more pain than her occasional other reversions to the past—to her old suspicious of him when he was a youthful protege of her husband and a presumed suitor of her adopted daughter Susy. High natures are more apt to forgive wrong done to themselves than any abstract injustice. And her capricious tyranny over her dependents and servants, or an unreasoning enmity to a neighbor or friend, outraged his finer sense more than her own misconception of himself. Nor did he dream that this was a thing most women seldom understand, or, understanding, ever forgive.

The coupe rattled over the stones or swirled through the muddy pools of the main thoroughfares. Newspaper and telegraphic offices were still brilliantly lit, and crowds were gathered among the bulletin boards....