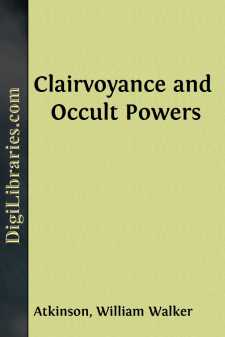 The student of occultism usually is quite familiar with the crass individual who assumes the cheap skeptical attitude toward occult matters, which attitude he expresses in his would-be "smart" remark that he "believes only in what his senses perceive." He seems to think that his cheap wit has finally disposed of the matter, the implication being that the occultist is a credulous, "easy" person who believes in the existence of things contrary to the evidence of the senses.

While the opinion or views of persons of this class are, of course, beneath the serious concern of any true student of occultism, nevertheless the mental attitude of such persons are worthy of our passing consideration, inasmuch as it serves to give us an object lesson regarding the childlike attitude of the average so-called "practical" persons regarding the matter of the evidence of the senses.

These so-called practical persons have much to say regarding their senses. They are fond of speaking of "the evidence of my senses." They also have much to say about the possession of "good sense" on their part; of having "sound common sense"; and often they make the strange boast that they have "horse sense," seeming to consider this a great possession. Alas, for the pretensions of this class of persons. They are usually found quite credulous regarding matters beyond their everyday field of work and thought, and accept without question the most ridiculous teachings and dogmas reaching them from the voice of some claimed authority, while they sneer at some advanced teaching which their minds are incapable of comprehending. Anything which seems unusual to them is deemed "flighty," and lacking in appeal to their much prized "horse sense."

But, it is not my intention to spend time in discussing these insignificant half-penny intellects. I have merely alluded to them in order to bring to your mind the fact that to many persons the idea of "sense" and that of "senses" is very closely allied. They consider all knowledge and wisdom as "sense;" and all such sense as being derived directly from their ordinary five senses. They ignore almost completely the intuitional phases of the mind, and are unaware of many of the higher processes of reasoning.

Such persons accept as undoubted anything that their senses report to them. They consider it heresy to question a report of the senses. One of their favorite remarks is that "it almost makes me doubt my senses." They fail to perceive that their senses, at the best, are very imperfect instruments, and that the mind is constantly employed in correcting the mistaken report of the ordinary five senses.

Not to speak of the common phenomenon of color-blindness, in which one color seems to be another, our senses are far from being exact. We may, by suggestion, be made to imagine that we smell or taste certain things which do not exist, and hypnotic subjects may be caused to see things that have no existence save in the imagination of the person....