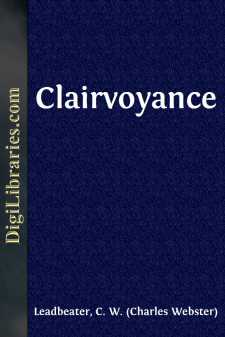 CHAPTER I. What Clairvoyance is.

Clairvoyance means literally nothing more than "clear-seeing," and it is a word which has been sorely misused, and even degraded so far as to be employed to describe the trickery of a mountebank in a variety show. Even in its more restricted sense it covers a wide range of phenomena, differing so greatly in character that it is not easy to give a definition of the word which shall be at once succinct and accurate. It has been called "spiritual vision," but no rendering could well be more misleading than that, for in the vast majority of cases there is no faculty connected with it which has the slightest claim to be honoured by so lofty a name.

For the purpose of this treatise we may, perhaps, define it as the power to see what is hidden from ordinary physical sight. It will be as well to premise that it is very frequently (though by no means always) accompanied by what is called clairaudience, or the power to hear what would be inaudible to the ordinary physical ear; and we will for the nonce take our title as covering this faculty also, in order to avoid the clumsiness of perpetually using two long words where one will suffice.

Let me make two points clear before I begin. First, I am not writing for those who do not believe that there is such a thing as clairvoyance, nor am I seeking to convince those who are in doubt about the matter. In so small a work as this I have no space for that; such people must study the many books containing lists of cases, or make experiments for themselves along mesmeric lines. I am addressing myself to the better-instructed class who know that clairvoyance exists, and are sufficiently interested in the subject to be glad of information as to its methods and possibilities; and I would assure them that what I write is the result of much careful study and experiment, and that though some of the powers which I shall have to describe may seem new and wonderful to them, I mention no single one of which I have not myself seen examples.

Secondly, though I shall endeavour to avoid technicalities as far as possible, yet as I am writing in the main for students of Theosophy, I shall feel myself at liberty sometimes to use, for brevity's sake and without detailed explanation, the ordinary Theosophical terms with which I may safely assume them to be familiar.

Should this little book fall into the hands of any to whom the occasional use of such terms constitutes a difficulty, I can only apologize to them and refer them for these preliminary explanations to any elementary Theosophical work, such as Mrs. Besant's Ancient Wisdom or Man and His Bodies. The truth is that the whole Theosophical system hangs together so closely, and its various parts are so interdependent, that to give a full explanation of every term used would necessitate an exhaustive treatise on Theosophy as a preface even to this short account of clairvoyance.

Before a detailed explanation of clairvoyance can usefully be attempted, however, it will be necessary for us to devote a little time to some preliminary considerations, in order that we may have clearly in mind a few broad facts as to the different planes on which clairvoyant vision may be exercised, and the conditions which render its exercise possible.

We are constantly assured in Theosophical literature that all these higher faculties are presently to be the heritage of mankind in general—that the capacity of clairvoyance, for example, lies latent in every one, and that those in whom it already manifests itself are simply in that one particular a little in advance of the rest of us. Now this statement is a true one, and yet it seems quite vague and unreal to the majority of people, simply because they regard such a faculty as something absolutely different from anything they have yet experienced, and feel fairly confident that they themselves, at any rate, are not within measurable distance of its development....