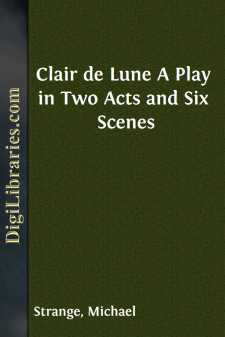 [An old park with avenues of trees leading away in all directions. Directly in background of stage there is a sheet of water fringed by willow and poplar trees. On the right and left is a high box hedge formed in curves with the top clipped in grotesque shapes mostly of birds. A statue is placed in the centre of each hedge, and beneath the statues are seats.

When the curtain rises several courtiers are discovered wandering or sitting about. There is much laughing and whispering behind fans.]

What an extraordinary evening! How calm the water is! It makes the swans look exactly like topaz clouds reflecting in a titanic mirror.

Yes. The sky is just as clear as the Queen's ear-rings of aquamarine. A storm could hardly blow up out of such blueness, so the masque is bound to be heavenly.

I hate to interrupt your celestial jargon with human speech, but does anybody know whether Phedro has been able to find the Prince and give him the Queen's command?

Probably not, but the Prince can never be found and is always forgiven. It is much to be loved in secret by a——

At court one must try not to think aloud or one is perhaps overheard by—[makes the motion of a blade across his throat].

O nonsense! Why, Phedro confides in everybody, and so nobody ever believes him. Yet he is always quite right.

He puts his nose into the dust that is swept out of great corners. Indeed he looks in unthinkable places, and finds the incredible.

Do you know what he told me lately?

I am ailing with curiosity.

It was a fantastic tale about one of our own lot. Indeed about one wearing strawberry leaves and with two very young sons growing up, and she, apparently imagining the younger to be the living likeness, growing plainer every day, of a former indiscretion, gives directions to her favourite lackey to get rid of this wrong one and he, from spleen, gives the honest child away. The lady dies shortly after; the father never suspects anything. The bastard inherits, so the entire tragedy was in vain.

Fear is always absurd. You should be quite sure you are found out first; even then you have only to look rather sharply at anyone you fear in order to reduce Him. Indeed, the best of defences is presumption upon the brotherhood of sin.

[A person of shifty, wizened visage enters. In a jocular tone.]

What is "O how true?" [He glances about him.] You are all looking very en rapport with the Almighty. In fact as if He had been telling you secrets. Did they concern me? I am always a prey to the desire of hearing what is said—just before and just after I am in a room.

[With much pomposity hiding his embarrassment.]

We were commanded to be in attendance on the Queen. Could you find Prince Charles? You were sent to find him, were you not...?