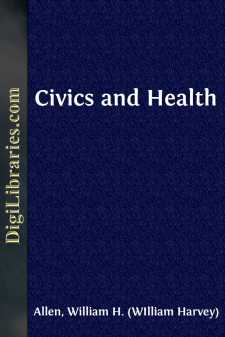 It is a common weakness of mankind to be caught by an idea and captivated by a phrase. To rest therewith content and to neglect the carrying of the idea into practice is a weakness still more common. It is this frequent failure of reformers to reduce their theories to practice, their tendency to dwell in the cloudland of the ideal rather than to test it in action, that has often made them distrusted and unpopular.

With our forefathers the phrase mens sana in corpore sano was a high favorite. It was constantly quoted with approval by writers on hygiene and sanitation, and used as the text or the finale of hundreds of popular lectures. And yet we shall seek in vain for any evidence of its practical usefulness. Its words are good and true, but passive and actionless, not of that dynamic type where words are "words indeed, but words that draw armed men behind them."

Our age is of another temper. It yearns for reality. It no longer rests satisfied with mere ideas, or words, or phrases. The modern Ulysses would drink life to the dregs. The present age is dissatisfied with the vague assurance that the Lord will provide, and, rightly or wrongly, is beginning to expect the state to provide. And while this desire for reality has its drawbacks, it has also its advantages. Our age doubts absolutely the virtues of blind submission and resignation, and cries out instead for prevention and amelioration. Disease is no longer regarded, as Cruden regarded it, as the penalty and the consequence of sin. Nature herself is now perceived to be capable of imperfect work. Time was when the human eye was referred to as a perfect apparatus, but the number of young children wearing spectacles renders that idea untenable to-day.

Meanwhile the multiplication of state asylums and municipal hospitals, and special schools for deaf or blind children and for cripples, speaks eloquently and irresistibly of an intimate connection between civics and health. There is a physical basis of citizenship, as there is a physical basis of life and of health; and any one who will take the trouble to read even the Table of Contents of this book will see that for Dr. Allen prevention is a text and the making of sound citizens a sermon. Given the sound body, we have nowadays small fear for the sound mind. The rigid physiological dualism implied in the phrase mens sana in corpore sano is no longer allowed. To-day the sound body generally includes the sound mind, and vice versa. If mental dullness be due to imperfect ears, the remedy lies in medical treatment of those organs,—not in education of the brain. If lack of initiative or energy proceeds from defective aëration of the blood due to adenoids blocking the air tides in the windpipe, then the remedy lies not in better teaching but in a simple surgical operation.

Shakespeare, in his wildwood play, saw sermons in stones and books in the running brooks. We moderns find a drama in the fateful lives of ordinary mortals, sermons in their physical salvation from some of the ills that flesh is heir to, and books—like this of Dr....