Citizenship A Manual for Voters 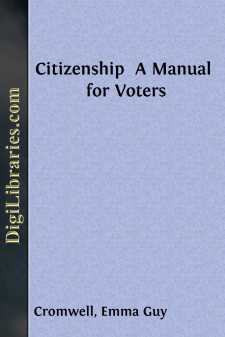 Realizing the need of a manual on citizenship for the new voters in Kentucky, the author has endeavored to compile such information on the government and its workings, as will be of use to all voters, especially the ones just entering political life. A strong appeal is made to the women voters of our nation to prepare themselves for public life by keeping in touch with the issues of the day as well as the functions of government. While it is a great privilege to take part in public affairs, and study the questions of the day, so that we can vote intelligently and criticize justly, let us not forget that the home is the most sacred refuge of life, the nucleus around which all pure and true civilization is formed, and that the chief end of all good government is to improve and protect the home, the church and the community.

Will you take part in building up your government and establishing "High Ideals" and true democracy?

Good citizenship means doing well one's part as a member of the community in which he lives, and carries with it certain privileges and duties.

A citizen is one who has the rights and privileges of the inhabitants of the community, state and nation, and as a duty should equip himself so as to render the best citizenship possible.

There are two classes of citizens; native born, and naturalized. Persons born in the United States and children born of American parents while abroad are native born. Naturalized citizens are aliens who through the process of naturalization have attained citizenship. Naturalization itself does not give the right to vote, as that is determined by the state laws. Most states give all citizens the right to vote who have lived in the state for one year, and about eleven states permit aliens to vote provided they declare their intention of becoming citizens.

Congress has the power to decide the conditions upon which aliens may become citizens.

Citizenship carries with it the enjoyment of civil rights, as the protection of the home and property, freedom of speech, religion, press, protection of the laws, etc. Wherever you go your citizenship goes with you, protecting and defending you. If you are in a foreign country you must abide by the laws of that country, but should you be treated unjustly the United States would protect you.

Our country is a land of freedom and opportunity, and it is our duty to help uplift the government, and as citizens we must study conditions and know how to govern and be governed. We must be familiar with our national and state Constitutions, for they are the fundamental principles by which we are governed. We must know how to make laws and how to have them executed. We must keep posted on the issues of the day, and know something of the standing and character of our public men and women.

The citizen who does not possess some knowledge of his government and its workings will become a prey to the demagogue, or of individuals who are anxious to advance their own interest at the expense of the people....