Chums of the Camp Fire 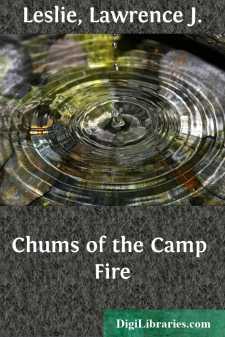 CHAPTER I THE FROG HUNTERS

"How many greenback saddles does that last bullfrog Max shot make, Toby!"

"Ginger! that's going some for so early in the spring season, isn't it? I'd like to get about twenty before we quit, which would make just five for each of us, Max, Bandy-legs, you and myself. And seems like we ought to knock over seven more this Saturday afternoon."

"Say, if only we were up in that old Dismal Swamp where I got lost last year, I bet you we could fill a bushel basket with big bullfrog saddles," remarked the third boy, whose lower limbs were a little inclined to grow in the shape of bows and who had on that account always gone by the significant name of "Bandy-legs" Griffin among his comrades.

"Well, the less you have to say about that time the better," remarked the fourth of the squad, a bright-faced young chap who was looked upon as a born leader, no matter whether on the field of sport as known to the boys of Carson, or in camp, and whose name was Max Hastings; "because you gave us a pretty bad scare the time we had to rush up there and hunt that swamp through to find you. Back up, Steve; easy now, I tell you!"

"Do you see the fourteenth victim crouching in the shallow water, or squatting up on the bank?" whispered the boy who just then held the little Flobert rifle, with which the so-called "game" was being bagged.

"Yes, and he must be the grand-daddy of the whole shooting match, he's so enormously big. Look at that log lying on the shore, just where the ice pushed it last winter. Don't you see a bunch of grass at the further end? Well, he's alongside that, and I reckon he hears us talking, for he looks wise and ready to plop into the water. Steady now, Touch-and-go Steve; make sure before you shoot."

Steve Dowdy, though warm-hearted, and a mighty good comrade, was inclined to be rather excitable at times, and on this account he had been dubbed "Touch-and-go Steve," a name that seemed peculiarly appropriate.

"I see the old rascal, all right," he murmured, as he slowly began to raise the little rifle to his shoulder, and take aim; "and let me tell you he's my meat. I've got a dead bead on him right now. Listen, fellows!"

The sharp, spiteful snap of the Flobert rifle followed. Then Bandy-legs gave a victorious crow, just as though he might have been a barnyard rooster returning to his own dung-heap after whipping the next-door neighbor's game fowl.

"That settled his hash for him, all right, and a fine shot for you, Steve. Now hand me the gun, for it's my turn next; and go and retrieve your game."

"You'll have to pick your way around there carefully, Steve," Max went on to caution, as he observed how the pond shore took several twists in that particular place, making it difficult to reach the spot where the monster greenback lay extended at full length, a prize worth risking much for.

"Oh! that's all right, Max; leave it to me. I wouldn't lose that buster, even if I had to strip, and swim over, with the water as cold as anything, because this is only Easter time."

With these words the late marksman started to make his way along the edge of the pond where their hunt was taking place, and which lay not more than a mile from the town of Carson, in which all of them had their homes....