Chronicles of England, Scotland and Ireland (2 of 6): England (6 of 12) Richard the First 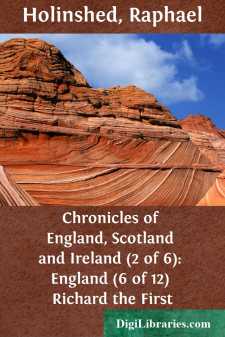 Second sonne to Henrie the second.

An. Reg. 1.1189. Richard the first of that name, and second sonne of Henrie the second, Wil. Paruus. began his reigne ouer England the sixt day of Julie, in the yere of our Lord 1189. in the seauen and thirteeth yeare of the emperour Frederike the first, in the eleuenth yere of the reigne of Philip the second king of France, and king William surnamed the Lion as yet liuing in the gouernement of Scotland.

This Richard, immediatlie after the solemnities of his fathers funerals were ended, made hast to Rouen, where he was ioifullie receiued, and proclamed duke of Normandie, receiuing the inuesture according to the Matt. Paris. custome, on the twentith day of Julie. Then studieng to set all things in good order on that side the sea, he made search where his fathers Stephan de Turnham committed to prison. treasure was preserued, and therevpon attached Stephan de Turnham, who was seneschall or gouernour (as we may call him) of Aniou, and committing him to prison, compelled him to make deliuerie of all such summes of monie as he had hid and laid vp in certeine castels by the commandement of the late king his father.

Matth. Paris. Polydor. Whilest he was thus occupied, his brother John came to him, to whom he ioifullie gaue the welcome, and besides all other things which his father had bequeathed vnto him by his testament in England, amounting to the value of foure thousand pounds of yearelie rent, with the earledome of Mortaigne, he procured a marriage for him (being now a widower) for Isabell daughter to the earle of Glocester married to John ye kings brother.She is named by diuerse authors Hauisia. Matth. Paris. R. Houed. his further aduancement with the ladie Isabell, daughter to Robert earle of Glocester, which earle had appointed the said John to be his heire as before is mentioned, although Baldwine the archbishop of Canturburie forbad the mariage, bicause they were coosens in the third degree of consanguinitie. To Robert earle of Leicester also he restored all his lands which had béene taken from him, and such persons as his father had disherited, he restored likewise to their former rights and possessions, howbeit those had forsaken his father, and taken part with him against his said father, he séemed now so much to mislike, that he remooued them vtterlie from his presence, and contrariwise preferred such as had continued faithfull vnto his father in time of the troubles.

Matt. Paris. At length, king Richard remembring himselfe of his mother quéene Elianor, who had béene separated from the bed of hir husband for the space of sixtéene yeares, and was as yet deteined in prison in England, wrote his letters vnto the rulers of the realme, commanding them to set The kings mother set at libertie. hir againe at libertie, and withall appointed hir by his letters patents, to take vpon hir the whole gouernment of the kingdome in his absence. The quéene being thus deliuered, and hauing now the cheefe authoritie & rule in hir hands, rode in progresse about the realme, to sée the estate thereof; and as she passed from place to place, she shewed gladsome countenance to the people wheresoeuer she came, dooing also what she could to pleasure them, that she might thereby win their good willes to hir, and to hir sonne: but speciallie remembring by hir late experience and tast thereof, what an irksome & most gréeuous thing imprisonment was, she caused the gailes to be opened, and foorthwith set no small number of prisoners at libertie by the way as she passed through the countries, according to the verse of Virgil,