Chronicles of England, Scotland and Ireland (2 of 6): England (5 of 12) Henrie the Second 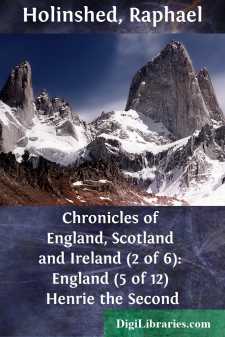 The Second Sonne of Geffrey Plantagenet.

An. Reg. 1. Henrie the second of that name, a French man borne, the second sonne of Geffrey Plantagenet earle of Aniou, begotten of Maud the empresse, daughter to Henrie the first, began his reigne ouer England the fiue and twentith of October, in the yeare after the creation of the world 5121. and in the yeare after the incarnation of our sauiour 1154. 1154. about the beginning of the third yeare of the emperour Frederike the first, the second of pope Anastasius the fourth, the seuenteenth yeare of Lewes the seuenth king of France, and second of Malcolme then king of Scotland. Immediatlie after he was aduertised of the death of king Stephan, he came ouer into England, landing at Ostreham about the seuenth day of N. Triuet. Matth. Paris. December. After he had got his companies togither, which by tempest were scattered in his passage, he came first to Winchester, where he receiued homage and fealtie of the Nobles of the realme resorting vnto him. This doone he set foorth towards London, where he was crowned king by Theobald archbishop of Canturburie the twentith daie of December.

N. Triuet. The archbishop of Rouen. The archbishop of Rouen, with thrée of his suffragans, the archbishop of Yorke, and manie other bishops of England: Theodorus the earle of Flanders, with a great number of other earles, lords and barons were present there at his coronation. He was at that time about the age of Polydor. three and twentie yeares, and to win the peoples loue, he spake manie comfortable words vnto them, to put them in hope (as the manner is) that they should find him a louing prince. He vsed the lords also verie Councellers chosen. courteouslie. And first of all, after his attéining to the crowne, he chose to him councellers of the grauest personages, and best learned in the lawes of the realme, with whose prudent aduice he perused those lawes, and amended them where he thought necessarie, commanding Ran. Higd. chieflie, that the lawes established by his grandfather Henrie the first should be obserued: and in manie things he relied vpon the aduice of Theobald archbishop of Canturburie, at whose sute he admitted Thomas Thom. Becket lord chancellor Becket to be his chancellour, which Becket the said archbishop had made archdeacon of Canturburie the yeare before.

Moreouer, by the sentence and doome of his councellers, to the intent that peace and quiet order might take place, and be the better An. Reg. 2.1155 mainteined, he commanded by waie of publishing a proclamation, that all strangers (which to get somwhat by the wars had flocked into the realme, Nic. Triuet. Polydor. Wil. Paruus. Strangers appointed to depart the realme. Aliens auoid the land. during the time of the ciuill discord betweene him and king Stephan) shuld depart home without further delaie: wherefore he appointed them a daie, before the which they should auoid vpon perill that might insue. It was a worlds woonder to sée and marke how suddenlie these aliens were quite vanished, as though they had béene phantasmes....