Chronicles of England, Scotland and Ireland (2 of 6): England (4 of 12) Stephan Earle Of Bullongne 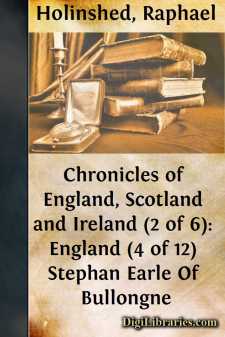 1135.An. Reg. 1. Stephan earle of Bullongne, the sonne of Stephan erle of Blois, by his wife Adela, daughter to William Conquerour, came ouer with all speed after the death of his vncle, and tooke vpon him the gouernement of the realme of England, partlie through confidence which he had in the puissance and strength of his brother Theobald earle of Blois, and partlie by the aid of his brother Henrie bishop of Winchester and abbat of Glastenburie, although that he with other of the Nobles had sworne afore to be true vnto the empresse and hir issue as lawfull heires of king Henrie latelie deceased.

A tempest. Matth. West. The same daie that he arriued in England, there chanced a mightie great tempest of thunder, horrible to heare, and lightning dreadfull to behold. Now bicause this happened in the winter time, it séemed against nature, and therefore it was the more noted as a foreshewing of some trouble and calamitie to come.

This Stephan began his reigne ouer the realme of England the second day of December, in the yere of our Lord 1135. in the eleuenth yeare of the emperour Lothair, the sixt of pope Innocentius the second, and about the xxvii. of Lewes the seuenth, surnamed Crassus king of France, Dauid the first of that name then reigning in Scotland, & entring into the twelfe Matth. Paris. Wil. Mal. Simon Dun. of his regiment. He was crowned at Westminster vpon S. Stephans day, by William archbishop of Canturburie, the most part of the Nobles of the realme being present, and swearing fealtie vnto him, as to their true and lawfull souereigne.

Howbeit, there were diuerse of the wiser sort of all estates, which regarding their former oth, could haue béene contented that the empresse should haue gouerned till hir sonne had come to lawfull age; notwithstanding they held their peace as yet, and consented vnto Periurie punished. Stephan. But this breach of their othes was worthilie punished afterward, insomuch that as well the bishops as the other Nobles either died an euill death, or were afflicted with diuerse kinds of calamities and mischances, and that euen here in this life, of which some of them as occasion serueth shall be remembred hereafter. Yet there were of them Wil. Malm. The bishop of Salisburies protestation. (and namelie the bishop of Salisburie) which protested that they were frée from their oth of allegiance made to the said empresse, bicause that without the consent of the lords of the land she was maried out of the realme, whereas they tooke their oth to receiue hir for queene, vpon that condition, that without their assent she should not marrie with any person out of the realme.

The bishops think to please God in breaking their oth. Moreouer (as some writers thinke) the bishops tooke it, that they should doo God good seruice in prouiding for the wealth of the realme, and the aduancement of the church by their periurie. For whereas the late deceassed king vsed himselfe not altogither for their purpose, they thought that if they might set vp and creat a king chéeflie by their especiall meanes and authoritie, he would follow their counsell better, and reforme such things as they iudged to be amisse....