Chronicles of England, Scotland and Ireland (2 of 6): England (2 of 12) William Rufus 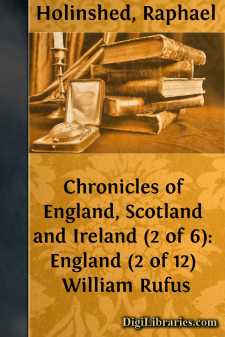 WILLIAM RUFUS, OR WILLIAM THE RED.

1087.An. Reg. 1. William, surnamed Rufus or William the Red, second sonne to William Conqueror, began his reigne ouer England the ninth of September, in the yeare 1087. about the 31. yeare of the emperour Henrie the fourth, and the 37. of Philip the first, king of France, Urbane the second then gouerning the sée of Rome, and Malcolme Cammoir reigning in Scotland. Polydor. Sim. Dunel. Matth. Paris. Immediatlie after his fathers deceasse, and before the solemnitie of the funerals were executed, he came ouer into England with no lesse spéed than was possible, and following the counsell of Lanfranke archbishop of Canturburie (in whome he reposed all his trust) he sought to win the fauour of the Péers and Nobilitie of the realme by great and liberall gifts. For although there were but few of the homeborne states that bare rule in the land at this season; yet those that remained, and whome his father in extreme sort had wronged, he verie gentlie enterteined, promising them not onlie to continue their good lord and souereigne, but also to make more fauourable ordinances than his father had left behind him; and furthermore to restore the former lawes and liberties of the realme, which his said father had abolished. Thus by faire words and politic he obtained his purpose. Howbeit soone after he forgat himselfe, Sim. Dunel. Marchar and Wilnot. and imprisoned Marchar and Wilnot, whom he had brought ouer with him from Normandie, being set at libertie by his father.

Lanfranke had fauoured him euen of a child.Matth. Paris.William Rufus is crowned the 26. of September.Polydor.His bountifull munificence. The nobles at the first wished rather to haue had the elder brother duke Robert to haue gouerned them: howbeit by the aide onelie of the said Lanfranke, whose authoritie was of no small force amongst all the lords of the land, this William (according to his fathers assignation) was proclaimed and crowned at Westminster on the 26. of September (being Sundaie, the 6. kalends of October) and the 11. indiction, as the best writers doo report. After his coronation, to gratifie the people, he went to Winchester, where he found great treasure which his father had laid vp there for his owne vse: this he fréelie spent in large gifts, and all kind of princelie largesse. He set verie manie prisoners at libertie, and did many other things to benefit the people, wherein the diligence and good aduice of Lanfranke did not a little preuaile. For he perceiued that there was in the king a variable mind, an vnstable nature, and a disposition to lightnesse and follie. Wherefore hée tooke oftentimes the more paines in persuading him not onelie to liberalitie (which is none of the least vertues in a prince) but also to vse a discreet and orderlie behauiour in all his dooings. Moreouer, he sticked not to put him in feare of an euill end, and troublesome regiment likelie to insue, if he did giue himselfe to vice and wilfulnesse, & neglect the charge thus by the prouidence of GOD committed to his hands....