Chronicles of England, Scotland and Ireland (2 of 6) England (1 of 12) William the Conqueror 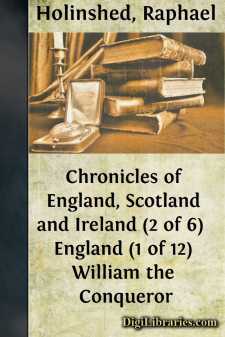 Considering with my selfe, right Honorable and my singular good Lord, how redie (no doubt) manie will be to accuse me of vaine presumption, for enterprising to deale in this so weightie a worke, and so far aboue my reach to accomplish: I haue thought good to aduertise your Honour, by what occasion I was first induced to vndertake the same, although the cause that moued me thereto hath (in part) yer this beene signified vnto your good Lordship.

Whereas therefore, that worthie Citizen Reginald Wolfe late Printer to the Queenes Maiestie, a man well knowne and beholden to your Honour, meant in his life time to publish an vniuersall Cosmographie of the whole world, and therewith also certaine particular histories of euery knowne nation, amongst other whom he purposed to vse for performance of his intent in that behalfe, he procured me to take in hand the collection of those histories, and hauing proceeded so far in the same, as little wanted to the accomplishment of that long promised worke, it pleased God to call him to his mercie, after fiue and twentie yeares trauell spent therein; so that by his vntimelie deceasse, no hope remained to see that performed, which we had so long trauelled about. Neuerthelesse those whom he put in trust to dispose his things after his departure hence, wishing to the benefit of others, that some fruit might follow of that whereabout he had imployed so long time, willed me to continue mine indeuour for their furtherance in the same. Which although I was redie to doo, so far as mine abilitie would reach, and the rather to answere that trust which the deceassed reposed in me, to see it brought to some perfection: yet when the volume grew so great as they that were to defraie the charges for the impression, were not willing to go through the whole, they resolued first to publish the histories of England, Scotland, and Ireland, with their descriptions; which descriptions, bicause they were not in such readinesse, as those of forren countries, they were inforced to vse the helpe of other better able to doo it than my selfe.

Moreouer, the Charts, wherein Maister Wolfe spent a great part of his time, were not found so complet as we wished: and againe, vnderstanding of the great charges and notable enterprise of that worthie Gentleman maister Thomas Sackford, in procuring the Charts of the seuerall prouinces of this realme to be set foorth, we are in hope that in time he will delineate this whole land so perfectlie, as shall be comparable or beyond anie delineation heretofore made of anie other region; and therefore leaue that to his well deserued praise. If any well willer will imitate him in so praiseworthie a worke for the two other regions, we will be glad to further his endeuour with all the helpes we may.

The histories I haue gathered according to my skill, and conferred the greatest part with Maister Wolfe in his life time, to his liking, who procured me so manie helpes to the furtherance thereof, that I was loth to omit anie thing that might increase the readers knowledge, which causeth the booke to grow so great. But receiuing them by parts, and at seuerall times (as I might get them) it may be, that hauing had more regard to the matter than the apt penning, I haue not so orderlie disposed them, as otherwise I ought; choosing rather to want order, than to defraud the reader of that which for his further vnderstanding might seeme to satisfie his expectation.

I therefore most humblie beseech your Honour to accept these Chronicles of England vnder your protection, and according to your wisedome and accustomed benignitie to beare with my faults; the rather, bicause you were euer so especiall good Lord to Maister Wolfe, to whom I was singularlie beholden; and in whose name I humblie present this rude worke vnto you; beseeching God, that as he hath made you an instrument to aduance his truth, so it may please him to increase his good gifts in you, to his glorie, the furtherance of the Queenes Maiesties seruice, and the comfort of all hir faithfull and louing subiects....