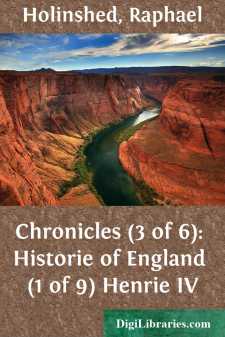 When king Richard had resigned (as before is specified) the scepter and crowne; Henrie Plantagenet borne at Bullingbroke in the countie of Lincolne, duke of Lancaster and Hereford, earle of Derbie, Leicester, and Lincolne, sonne to Iohn of Gant duke of Lancaster, with generall consent both of the lords & commons, was published, proclamed, and declared king of England and of France, and lord of Ireland, the last daie of September, in the yeare of the world 5366, of our Lord 1399, of the reigne of the emperour Wenceslaus the two and twentith, of Charles the first king of France the twentith, and the tenth of Robert the third king of Scots. After that king Richard had surrendered his title, and dispossessed himselfe (which Chr. Okl. noteth in few words, saieing;

New officers made. king Henrie made certeine new officers. And first in right of his earledome of Leicester he gaue the office of high steward of England (belonging to the same earledome) vnto his second sonne the lord Thomas, who by his fathers commandement exercised that office, being assisted (by reason of his tender age) by Thomas Persie earle of Worcester. The earle of Northumberland was made constable of England: sir Iohn Scirlie lord chancellor, Iohn Norburie esquier lord treasurer, sir Richard Clifford lord The parlemÄ“t new sÅ«moned. priuie seale. Forsomuch as by king Richards resignation and the admitting of a new king, all plées in euerie court and place were ceased, and without daie discontinued, new writs were made for summoning of the parlement vnder the name of king Henrie the fourth, the same to be holden, as before was appointed, on mondaie next insuing. Record Turris. Vpon the fourth day of October, the lord Thomas second sonne to the king sat as lord high steward of England by the kings commandement in the White-hall of the kings palace at Westminster, and as belonged to his office, he caused inquirie to be made what offices were to be exercised by anie maner of persons the daie of the kings coronation, and what fées were belonging to the same, causing proclamation to be made, that what noble man or other that could claime anie office that daie of the solemnizing the kings coronation, they should come and put in their bils cÅprehending Claiming of offices at the coronation. their demands. Whervpon diuers offices & fees were claimed, as well by bils as otherwise by spéech of mouth, in forme as here insueth.

First, the lord Henrie, the kings eldest sonne, to whome he as in right of his duchie of Lancaster had appointed that office, claimed to beare before the king the principall Curtana.The earle of Summerset.The earle of Northumberland.The Ile of Man. sword called Curtana, and had his sute granted. Iohn erle of Summerset, to whom the king as in right of his earledome of Lincolne, had granted to be caruer the daie of his coronation, and had it confirmed. Henrie Persie earle of Northumberland, and high constable of England, by the kings grant claimed that office, and obteined it to inioy at pleasure. The same earle in right of the Ile of Man, which at that present was granted to him, and to his heires by the king, claimed to beare on the kings left side a naked sword, with which the king was girded, when before his coronation Lancaster sword.The earl of Westmerland. he entered as duke of Lancaster into the parts of Holdernesse, which sword was called Lancasters sword. Rafe erle of Westmerland, and earle marshall of England, by the kings grant claimed the same office, and obteined it, notwithstanding The duke of Norffolke. that the attornies of the duke of Norfolke, presented to the lord steward their petition on the dukes behalfe, as earle marshall, to exercise the same....