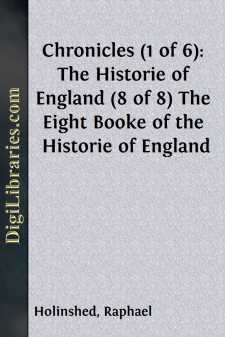 EDWARD.Hen. Hunt. Immediatlie vpon the deth of Hardiknought, and before his corps was committed to buriall, his halfe brother Edward, sonne of king Egelred begotten of quéene Emma, was Polydor chosen to be K. of England, by the generall consent of all the nobles and commons of the realme. Therevpon were ambassadours sent with all spéed into Normandie, to signifie vnto him his election, and to bring him from thence into England in deliuering pledges for more assurance, that no fraud nor deceit was ment of the Englishmen, but that vpon his comming thither, he should receiue the crowne without all contradiction. Edward then aided by his coosine William duke of Normandie, tooke the sea, & with a small companie of Normans came Henr. Hunt.Wil. Malm.The third of Aprill.1043. into England, where he was receiued with great ioy as king of the realme, & immediatlie after was crowned at Winchester by Edsinus then archbishop of Canturburie, on Easter day in the yeare of our Lord 1043, which fell also about the fourth yeare of the emperour Henrie the third, surnamed Niger, in the 12 yeare of Henrie the first of that name king of France, and about the third yeare of Macbeth king of Scotland.

This Edward the third of that name before the conquest, was of nature more méeke and simple than apt for the gouernement of the realme, & therefore did earle Goodwine not onelie séeke the destruction of his elder brother Alfred, but holpe all that he might to aduance this Edward to the crowne, in hope to beare great rule in the realme vnder him, whome he knew to be soft, gentle, and easie to be persuaded. But whatsoeuer writers doo report hereof, sure it is, that Edward was the elder brother, and not Alfred: so that if earle Goodwine did shew his furtherance by his pretended cloake of offering his friendship vnto Alfred to betraie him,[Page 740] he did it by king Harolds commandement, and yet it may be that he meant to haue vsurped the crowne to him selfe, if each point had answered his expectation in the sequele of things, as he hoped they would; and therfore had not passed if both the brethren had béene in heauen. But yet when the world framed contrarie (peraduenture) to his purpose, he did his best to aduance Edward, trusting to beare no small rule vnder him, being knowen to be a man more appliable to be gouerned by other than to trust to his owne wit: and so chieflie by the assistance of earle Goodwine (whose authoritie, as appeareth, was not small within the realme of England in those daies) Edward came to atteine the crowne: wherevnto the earle of Chester Leofrike also shewed all the furtherance that in him laie.

Ran. Higd. ex Mariano.Alb. Crantz. Some write (which seemeth also to be confirmed by the Danish chronicles) that king Hardiknought in his life time had receiued this Edward into his court, and reteined him still in the same in most honorable wise. But for that it may appeare in the abstract of the Danish chronicles, what their writers had of this matter recorded, we doo here passe ouer, referring those that be desirous to know the diuersitie of our writers and theirs, vnto the same chronicles, where they may find it more at large expressed....