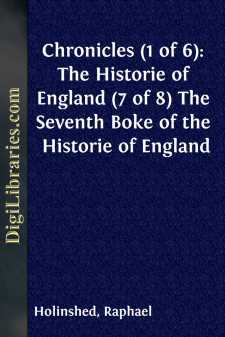 EGELRED. In the former booke was discoursed the troubled state of this land by the manifold and mutinous inuasions of the Danes; who though they sought to ingrosse the rule of euerie part and parcell therof into their hands; yet being resisted by the valiantnesse of the gouernors supported with the aid of their people, they were disappointed of their expectation, and receiued manie a dishonorable or rather reprochfull repulse at their aduersaries hands. Much mischiefe doubtlesse they did, and more had doone, if they had not béene met withall in like measure of extremitie as they offred, to the offense and ouerthrow of great multitudes. Their first entrance into this land is controuersed among writers, some saieng that it was in the daies of king Britricus, other some affirming that it was in the time of king Egbert, &c: about which point (sith it is a matter of no great moment) we count it labour lost to vse manie woords: onelie this by the waie is notewoorthie, that the Danes had an vnperfect or rather a lame and limping rule in this land, so long as the gouernors were watchfull, diligent, politike at home, and warlike abroad. But when these kind of kings discontinued, and that the raines of the regiment fell into the hands of a pezzant not a puissant prince, a man euill qualified, dissolute, slacke and licentious, not regarding the dignitie of his owne person, nor fauoring the good estate of the people; the Danes who before were coursed from coast to coast, and pursued from place to place, as more willing to leaue the land, than desirous to tarrie in the same; tooke occasion of stomach and courage to reenter this Ile, & waxing more bold and confident, more desperate and venturous, spared no force, omitted no opportunitie, let slip no aduantage that they might possiblie take, to put in practise and fullie to accomplish their long conceiued purpose.

Now bicause the Danes in the former kings daies were reencountred (and that renowmedlie)[Page 703] so often as they did encounter, and séeking the totall regiment, were dispossessed of their partile principalitie, which by warlike violence they obteined; and for that the Saxons were interessed in the land, and these but violent incrochers, vnable to kéepe that which they came to by constreint; we haue thought it conuenient to comprise the troubled estate of that time in the sixt booke; the rather for the necessarie consequence of matters then in motion: and héere déeme it not amisse, at so great and shamefull loosenesse (speciallie in a prince) ministring hart and courage to the enimie, to begin the seuenth booke. Wherin is expressed the chiefest time of their flourishing estate in this land; if in tumults, vprores, battels, and bloudshed, such a kind of estate may possiblie be found. For héere the Danes lord it, heere they take vpon them like souereignes, & héere (if at anie time they had absolute authoritie) they did what they might in the highest degrée: as shall be declared in the vnfortunate affaires of vngratious Egelred or Etheldred, the sonne of king Edgar, and of his last wife queene Alfred, who was ordeined king in place of his brother Edward, after the same Edward was dispatched out of the waie, and began his reigne ouer 979....