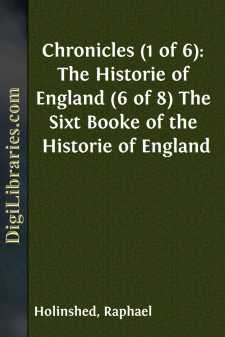 INAS. 689. After that Ceadwalla, late K. of the Westsaxons was gone to Rome, where he departed this life (as afore is shewed) his coosen Inas or Ine was made king of the Westsaxons, begining his reigne in the yéere of our Lord 689, in the third yeere of the emperor Iustinianus the third, the 11 yéere of the reigne of Theodoricus K. of France, and about the second The Britains ceasse to reigne in this land yéere of the reigne of Eugenius king of Scots. Now because the rule of the Britains commonlie called Welshmen, ceassed in this realme, as by confession of their owne writers it appéereth, and that in the end the whole monarchie of the same realme came to the hands of the kings of Westsaxons, we haue thought méet to refer things generall vnto the reignes of the same kings, as before we did in the Britaine kings, reseruing the particular dooings to the kings of the other prouinces or kingdoms, as the same haue fallen out, and shall come to hand.

Fabian.H. Hunt. This Inas, whome some (mistaking N for V) doo wrongfullie name Iue or Iewe, prooued a right excellent prince, he was descended of the ancient linage of the kings of the Westsaxons, as sonne to one Kenred, that was sonne to Ceolwald the son of Cutha or Cutwine, that was sonne to Kenricke the sonne of Certicus, the first king of Westsaxons. But he was admitted to the kingdome more for the valiant prowes knowne to rest in his woorthie person, than for the successiue ofspring of which he was descended. The first voiage that he made, was against the Kentishmen, on whome he purposed to reuenge the death of his coosen Matt. Westm.Wil. Malm. Mollo, the griefe whereof as yet he kept in fresh memorie. But when the Kentishmen perceiued, that to resist him by force, they were nothing able, they attempted by monie to buy their peace, and so obteined their purpose, vpon paiment made to him of thirtie thousand marks of siluer.

Anno 708 as is noted byMatt. West.H. Hunt. After this, about the 21 yéere of his reigne, king Inas and his coosen Nun fought with[Page 639] Gerent king of the Britains. In the beginning of the battell, one Higelbald a noble man of the Westsaxons part was slaine, but in the end Gerent with his Britains was chased. In the Matt. West. saith 718 26 yéere of his reigne; the same Inas fought a mightie battell against Cheolred king of Mercia, at Wodenessburie, with doubtfull victorie, for it could not well be iudged whether part susteined greater losse. In the 36 yéere of his reigne, king Inas inuaded the Southsaxons with a mightie armie, and slue in battell Ealdbright or Aldinius king of the Southsaxons, Matth. West. saith 722. The end of the kingdome of the Southsaxons. and ioined that kingdome vnto the kingdome of the Westsaxons: so that from thencefoorth the kingdome of those Southsaxons ceassed, after they had reigned in that kingdome by the space of five kings successiuelie, that is to say, Ella, Cissa, Ethelwalke, Berutius, and this last Aldinius or Ealdbright.

Finallie, when Inas had reigned 37 yéeres, and 10 or 11 od moneths, he renounced the Inas went to Rome and there died....