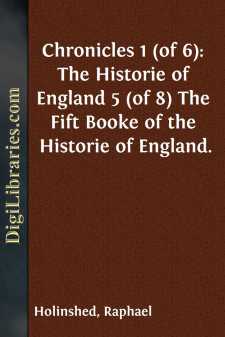 Having ended our former booke with the end of the Romane power ouer this Iland, wherein the state of the Iland vnder them is at full described; it remaineth now that we procéed to declare, in what state they were after the Romans had refused to gouerne them anie longer. Wherefore we will addresse our selues to saie somewhat touching the succession of the British kings, as their histories make mention.

CONSTANTINUS. Gal. Mon.Matt. Westm. Constantinus the brother of Aldroenus king of little Britaine, at the sute and earnest request of the archbishop of London, made in name of all the Britains in the Ile of great Britaine, was sent into the same Ile by his said brother Aldroenus vpon couenants ratified in manner as before is recited, and brought with him a conuenient power, landing with the same at Totnesse in Deuonshire. Immediatlie after his cГ…ВЌming on land, he gathered to him Caxton saith 12000. but Gal. and others say but 2000. a great power of Britains, which before his landing were hid in diuerse places of the Ile. Then went he foorth with them, and gaue battell to the enimies, whom he vanquished: & slue that tyrannicall king Guanius there in the field (as some bookes haue.) Howbeit, this The British historie disagreeth from the Scotish. agréeth not with the Scotish writers, which affirme that they got the field, but yet lost their king named Dongard (as in their historie ye maie read.)

But to procéed as our writers report the matter. When the Britains had thus ouercome their enimies, they conueied their capteine the said Constantine vnto Cicester, and there in fulfilling their promise and couenant made to his brother, crowned him king of great Britaine, in the yéere of our Lord 433, which was about the fift yéere of the emperour Valentinianus the second, Matth. West. saith 435. and third yéere of Clodius king of the Frankners after called Frenchmen, which then began to settle themselues in Gallia, whereby the name of that countrie was afterwards changed and called France. Constantine being thus established king, ruled the land well and noblie, and defended it from all inuasion of enimies during his life. He begat of his wife thrée sonnes (as the British historie affirmeth) Constantius, Aurelius Ambrosius, and Vter surnamed named Pendragon. The eldest, bicause he perceiued him to be but dull of wit, and not[Page 552] verie toward, he made a moonke, placing him within the abbie of Amphibalus in Winchester.

In a groue of bushes as Gal. saith. Matth. West. Beda. Orosius. Blondus. Finallie this Constantine, after he had reigned ten yéeres, was traitorouslie slaine one day in his owne chamber (as some write) by a Pict, who was in such fauor with him, that he might at all times haue frée accesse to him at his pleasure. Neither the Romane writers, nor Beda, make anie mention of this Constantine: but of the other Constantine they write, which immediatlie after the vsurper Gratian was dispatched out of the way (as before ye haue heard) was aduanced to the rule of this land, and title of emperour, onelie in hope of his name, and for no other respect of towardnesse in him, afore time being but a meane souldier, without anie degrée of honour....