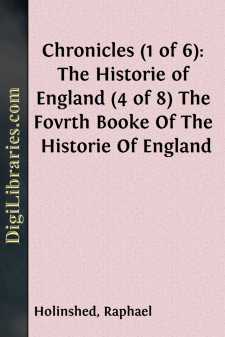 Now Plautius had much adoo to find out the Britains in their lurking holes and couerts; howbeit when he had traced them out, first he vanquished Cataratacus, and after Togodumnus the sonnes of Cynobellinus: for their father was dead not verie long before. These therefore fléeing their waies, Plautus receiued part of the people called Bodumni Catuellani Bodumni (which were subiects vnto them that were called Catuellani) into the obeisance of the Romans: and so leauing there a garrison of souldiors, passed further till he came to a riuer which could not well be passed without a bridge: wherevpon the Britains tooke small regard to defend the passage, as though they had béene sure inough. But Plautius appointed a certeine number of Germans which he had there with him (being vsed to swim ouer riuers although neuer so swift) to get ouer, which they did, sleaing and wounding the Britains horsses, which were fastened to their wagons or chariots, so that the Britains were not able to doo anie péece of their accustomed seruice with the same.

Herewithall was Flauius Vespasianus (that afterwards was emperour) with his brother Sabinus sent ouer that riuer, which being got to the further side, slue a great number of the enimies. The residue of the Britains fled, but the next day proffered a new battell, in the which they fought so stoutlie, that the victorie depended long in doubtfull balance, till Caius Sidius Geta being almost at point to be taken, did so handle the matter, that the Britains finallie were put to flight: for the which his valiant dooings, triumphant honors were bestowed vpon him, although he was no consull.

The Britains after this battell, withdrew to the riuer of Thames, néere to the place where[Page 483] it falleth into the sea, and knowing the shallowes and firme places thereof, easilie passed ouer to the further side, whom the Romans following, through lacke of knowledge in the nature of the places, they fell into the marish grounds, and so came to lose manie of their men, namelie of the Germans, which were the first that passed ouer the riuer to follow the Britains, partlie by a bridge which lay within the countrie ouer the said riuer, and partlie by swimming, and other such shift as they presentlie made.

Togodumnus The Britains hauing lost one of their rulers, namelie Togodumnus (of whom ye haue heard before) were nothing discouraged, but rather more egerlie set on reuenge. Plautius perceiuing their fiercenesse, went no further, but staid and placed garrisons in steeds where néed required, to keepe those places which he had gotten, and with all spéed sent aduertisement vnto Claudius, according to that he had in commandement, if anie vrgent necessitie should so mooue him. Claudius therefore hauing all things before hand in a readinesse, straightwaies vpon the receiuing of the aduertisement, departed from Rome, and came by water vnto Ostia, and from thence vnto Massilia, and so through France sped his iournies till he came to the side of the Ocean sea, and then imbarking himselfe with his people, passed ouer into Britaine, and came to his armie which abode his comming néere the Thames side, where being ioined, they passed the riuer againe, fought with the Britains in a pitcht field, and getting the victorie, tooke the towne of Camelodunum (which some count to be Colchester) being the chiefest citie apperteining vnto Cynobelinus....