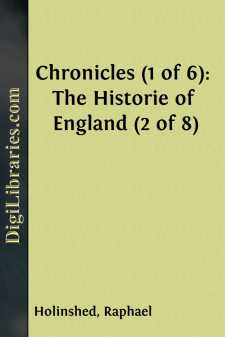 Hitherto haue we spoken of the inhabitants of this Ile before the comming of Brute, although some will néeds haue it, that he was the first which inhabited the same with his people descended of the Troians, some few giants onelie excepted whom he vtterlie destroied, and left not one of them aliue through the whole Ile. But as we shall not doubt of Brutes comming hither, so may we assuredly thinke, that he found the Ile peopled either with the generation of those which Albion the giant had placed here, or some other kind of people whom he did subdue, and so reigned as well ouer them as ouer those which he brought with him.

Humfr. Lhoyd. This Brutus, or Brytus [for this letter (Y) hath of ancient time had the sounds both of V and I] (as the author of the booke which Geffrey of Monmouth translated dooth affirme) was the sonne of Siluius, the sonne of Ascanius, the sonne of Aeneas the Troian, begotten of his wife Creusa, & borne in Troie, before the citie was destroied. But as other doo take Harding. Alex. Neuil. W. Har. it, the author of that booke (whatsoeuer he was) and such other as follow him, are deceiued onelie in this point, mistaking the matter, in that Posthumus the sonne of Aeneas (begotten of his wife Lauinia, and borne after his fathers deceasse in Italie) was called Ascanius, who had issue a sonne named Iulius, who (as these other doo coniecture) was the father of Brute, that noble chieftaine and aduenturous leader of those people, which being descended (for the more part in the fourth generation) from those Troians that escaped with life, when that roiall citie was destroied by the Gréekes, got possession of this woorthie and most famous Ile.

To this opinion Giouan Villani a Florentine in his vniuersall historie, speaking of Aeneas and his ofspring kings in Italie, séemeth to agrée, where he saith: "Siluius (the sonne of Aeneas by his wife Lauinia) fell in loue with a néece of his mother Lauinia, and by hir had a sonne, of whom she died in trauell, and therefore was called Brutus, who after as he grew in some stature, and hunting in a forrest slue his father vnwares, and therevpon for feare of his grandfather Siluius Posthumus he fled the countrie, and with a retinue of such as followed him, passing through diuers seas, at length he arriued in the Ile of Britaine."

Concerning therefore our Brute, whether his father Iulius was sonne to Ascanius the sonne of Aeneas by his wife Creusa, or sonne to Posthumus called also Ascanius, and sonne to Aeneas by his wife Lauinia, we will not further stand. But this, we find, that when he came to the age of 15. yéeres, so that he was now able to ride abrode with his father into the forrests and chases, he fortuned (either by mishap, or by Gods prouidence) to strike his Brute killeth his father. father with an arrow, in shooting at a déere, of which wound he also died. His grandfather[Page 438] (whether the same was Posthumus, or his elder brother) hearing of this great misfortune that had chanced to his sonne Siluius, liued not long after, but died for verie greefe and sorow (as is supposed) which he conceiued thereof....