Chronicle of the Conquest of Granada 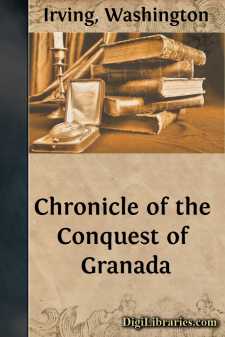 Although the following Chronicle bears the name of the venerable Fray Antonio Agapida, it is rather a superstructure reared upon the fragments which remain of his work. It may be asked, Who is this same Agapida, who is cited with such deference, yet whose name is not to be found in any of the catalogues of Spanish authors? The question is hard to answer. He appears to have been one of the many indefatigable authors of Spain who have filled the libraries of convents and cathedrals with their tomes, without ever dreaming of bringing their labors to the press. He evidently was deeply and accurately informed of the particulars of the wars between his countrymen and the Moors, a tract of history but too much overgrown with the weeds of fable. His glowing zeal, also, in the cause of the Catholic faith entitles him to be held up as a model of the good old orthodox chroniclers, who recorded with such pious exultation the united triumphs of the cross and the sword. It is deeply to be regretted, therefore, that his manuscripts, deposited in the libraries of various convents, have been dispersed during the late convulsions in Spain, so that nothing is now to be met of them but disjointed fragments. These, however, are too precious to be suffered to fall into oblivion, as they contain many curious facts not to be found in any other historian. In the following work, therefore, the manuscript of the worthy Fray Antonio will be adopted wherever it exists entire, but will be filled up, extended, illustrated, and corroborated by citations from various authors, both Spanish and Arabian, who have treated of the subject. Those who may wish to know how far the work is indebted to the Chronicle of Fray Antonio Agapida may readily satisfy their curiosity by referring to his manuscript fragments, carefully preserved in the Library of the Escurial.

Before entering upon the history it may be as well to notice the opinions of certain of the most learned and devout historiographers of former times relative to this war.

Marinus Siculus, historian to Charles V., pronounces it a war to avenge ancient injuries received by the Christians from the Moors, to recover the kingdom of Granada, and to extend the name and honor of the Christian religion.*

Estevan de Garibay, one of the most distinguished Spanish historians, regards the war as a special act of divine clemency toward the Moors, to the end that those barbarians and infidels, who had dragged out so many centuries under the diabolical oppression of the absurd sect of Mahomet, should at length be reduced to the Christian faith.*

Padre Mariana, also a venerable Jesuit and the most renowned historian of Spain, considers the past domination of the Moors a scourge inflicted on the Spanish nation for its iniquities, but the conquest of Granada the reward of Heaven for its great act of propitiation in establishing the glorious tribunal of the Inquisition!...