Christopher Columbus and the New World of His Discovery - Volume 8 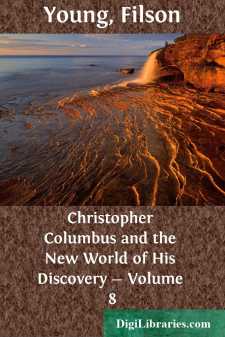 RELIEF OF THE ADMIRAL

There was no further difficulty about provisions, which were punctually brought by the natives on the old terms; but the familiar, spirit of sedition began to work again among the unhappy Spaniards, and once more a mutiny, led this time by the apothecary Bernardo, took form—the intention being to seize the remaining canoes and attempt to reach Espanola. This was the point at which matters had arrived, in March 1504, when as the twilight was falling one evening a cry was raised that there was a ship in sight; and presently a small caravel was seen standing in towards the shore. All ideas of mutiny were forgotten, and the crew assembled in joyful anticipation to await, as they thought, the coming of their deliverers. The caravel came on with the evening breeze; but while it was yet a long way off the shore it was seen to be lying to; a boat was lowered and rowed towards the harbour.

As the boat drew near Columbus could recognise in it Diego de Escobar, whom he remembered having condemned to death for his share in the rebellion of Roldan. He was not the man whom Columbus would have most wished to see at that moment. The boat came alongside the hulks, and a barrel of wine and a side of bacon, the sea-compliment customary on such occasions, was handed up. Greatly to the Admiral's surprise, however, Escobar did not come on board, but pushed his boat off and began to speak to Columbus from a little distance. He told him that Ovando was greatly distressed at the Admiral's misfortunes; that he had been much occupied by wars in Espanola, and had not been able to send a message to him before; that he greatly regretted he had no ship at present large enough to bring off the Admiral and his people, but that he would send one as soon as he had it. In the meantime the Admiral was to be assured that all his affairs in Espanola were being attended to faithfully, and that Escobar was instructed to bring back at once any letters which the Admiral might wish to write.

The coolness and unexpectedness of this message completely took away the breath of the unhappy Spaniards, who doubtless stood looking in bewilderment from Escobar to Columbus, unable to believe that the caravel had not been sent for their relief. Columbus, however, with a self-restraint which cannot be too highly praised, realised that Escobar meant what he said, and that by protesting against his action or trying to interfere with it he would only be putting himself in the wrong. He therefore retired immediately to his cabin and wrote a letter to Ovando, in which he drew a vivid picture of the distress of his people, reported the rebellion of the Porras brothers, and reminded Ovando that he relied upon the fulfilment of his promise to send relief. The letter was handed over to Escobar, who rowed back with it to his caravel and immediately sailed away with it into the night.

Before he could retire to commune with his own thoughts or to talk with his faithful brother, Columbus had the painful duty of speaking to his people, whose puzzled and disappointed faces must have cost him some extra pangs....