Christopher Columbus and the New World of His Discovery - Volume 7 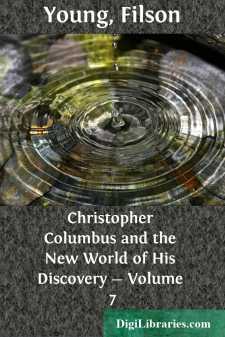 The first things seen by Francisco de Bobadilla when he entered the harbour of San Domingo on the morning of the 23rd of August 1500 were the bodies of several Spaniards, hanging from a gibbet near the water-side —a grim confirmation of what he had heard about the troubled state of the island. While he was waiting for the tide so that he might enter the harbour a boat put off from shore to ascertain who was on board the caravels; and it was thus informally that Bobadilla first announced that he had come to examine into the state of the island. Columbus was not at San Domingo, but was occupied in settling the affairs of the Vega Real; Bartholomew also was absent, stamping out the last smouldering embers of rebellion in Xaragua; and only James was in command to deal with this awkward situation.

Bobadilla did not go ashore the first day, but remained on board his ship receiving the visits of various discontented colonists who, getting early wind of the purpose of his visit, lost no time in currying favour with him, Probably he heard enough that first day to have damned the administration of a dozen islands; but also we must allow him some interest in the wonderful and strange sights that he was seeing; for Espanola, which has perhaps grown wearisome to us, was new to him. He had brought with him an armed body-guard of twenty-five men, and in the other caravel were the returned slaves, babies and all, under the charge of six friars. On the day following his arrival Bobadilla landed and heard mass in state, afterwards reading out his commission to the assembled people. Evidently he had received a shocking impression of the state of affairs in the island; that is the only explanation of the action suddenly taken by him, for his first public act was to demand from James the release of all the prisoners in the fortress, in order that they and their accusers should appear before him.

James is in a difficulty; and, mule-like, since he does not know which way to turn, stands stock still. He can do nothing, he says, without the Admiral's consent. The next day Bobadilla, again hearing mass in state, causes further documents to be read showing that a still greater degree of power had been entrusted to his hands. Mule-like, James still stands stock still; the greatest power on earth known to him is his eldest brother, and he will not, positively dare not, be moved by anything less than that. He refuses to give up the prisoners on any grounds whatsoever, and Bobadilla has to take the fortress by assault—an easy enough matter since the resistance is but formal.

The next act of Bobadilla's is not quite so easy to understand. He quartered himself in Columbus's house; that perhaps was reasonable enough since there may not have been another house in the settlement fit to receive him; but he also, we are told, took possession of all his papers, public and private, and also seized the Admiral's store of money and began to pay his debts with it for him, greatly to the satisfaction of San Domingo....