Christopher Columbus and the New World of His Discovery - Volume 6 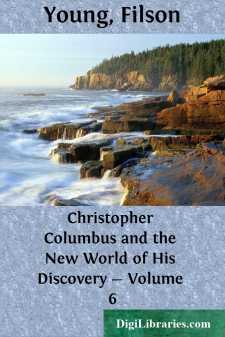 Columbus was at sea again; firm ground to him, although so treacherous and unstable to most of us; and as he saw the Spanish coast sinking down on the horizon he could shake himself free from his troubles, and feel that once more he was in a situation of which he was master. He first touched at Porto Santo, where, if the story of his residence there be true, there must have been potent memories for him in the sight of the long white beach and the plantations, with the Governor's house beyond. He stayed there only a few hours and then crossed over to Madeira, anchoring in the Bay of Funchal, where he took in wood and water. As it was really unnecessary for him to make a port so soon after leaving, there was probably some other reason for his visit to these islands; perhaps a family reason; perhaps nothing more historically important than the desire to look once more on scenes of bygone happiness, for even on the page of history every event is not necessarily big with significance. From Madeira he took a southerly course to the Canary Islands, and on June 16th anchored at Gomera, where he found a French warship with two Spanish prizes, all of which put to sea as the Admiral's fleet approached. On June 21st, when he sailed from Gomera, he divided his fleet of six vessels into two squadrons. Three ships were despatched direct to Espanola, for the supplies which they carried were urgently needed there. These three ships were commanded by trustworthy men: Pedro de Arana, a brother of Beatriz, Alonso Sanchez de Carvajal, and Juan Antonio Colombo—this last no other than a cousin of Christopher's from Genoa. The sons of Domenico's provident younger brother had not prospered, while the sons of improvident Domenico were now all in high places; and these three poor cousins, hearing of Christopher's greatness, and deciding that use should be made of him, scraped together enough money to send one of their number to Spain. The Admiral always had a sound family feeling, and finding that cousin Antonio had sea experience and knew how to handle a ship he gave him command of one of the caravels on this voyage—a command of which he proved capable and worthy. From these three captains, after giving them full sailing directions for reaching Espanola, Columbus parted company off the island of Ferro. He himself stood on a southerly course towards the Cape Verde Islands.

His plan on this voyage was to find the mainland to the southward, of which he had heard rumours in Espanola. Before leaving Spain he had received a letter from an eminent lapidary named Ferrer who had travelled much in the east, and who assured him that if he sought gold and precious stones he must go to hot lands, and that the hotter the lands were, and the blacker the inhabitants, the more likely he was to find riches there. This was just the kind of theory to suit Columbus, and as he sailed towards the Cape Verde Islands he was already in imagination gathering gold and pearls on the shores of the equatorial continent....