Christopher Columbus and the New World of His Discovery - Volume 5 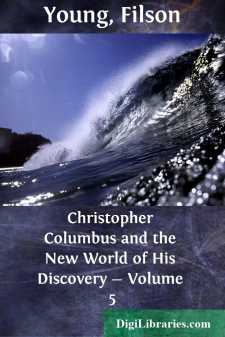 CHAPTER I THE VOYAGE TO CUBA

The sight of the greater part of their fleet disappearing in the direction of home threw back the unstable Spanish colony into doubt and despondency. The brief encouragement afforded by Ojeda's report soon died away, and the actual discomforts of life in Isabella were more important than visionary luxuries that seemed to recede into the distance with the vanishing ships. The food supply was the cause of much discomfort; the jobbery and dishonesty which seem inseparable from the fitting out of a large expedition had stored the ships with bad wine and imperfectly cured provisions; and these combined with the unhealthy climate to produce a good deal of sickness. The feeling against Columbus, never far below the Spanish surface, began to express itself definitely in treacherous consultations and plots; and these were fomented by Bernal Diaz, the comptroller of the colony, who had access to Columbus's papers and had seen the letter sent by him to Spain. Columbus was at this time prostrated by an attack of fever, and Diaz took the opportunity to work the growing discontent up to the point of action. He told the colonists that Columbus had painted their condition in far too favourable terms; that he was deceiving them as well as the Sovereigns; and a plot was hatched to seize the ships that remained and sail for home, leaving Columbus behind to enjoy the riches that he had falsely boasted about. They were ready to take alarm at anything, and to believe anything one way or the other; and as they had believed Ojeda when he came back with his report of riches, now they believed Cado, the assayer, who said that even such gold as had been found was of a very poor and worthless quality. The mutiny developed fast; and a table of charges against Columbus, which was to be produced in Spain as a justification for it, had actually been drawn up when the Admiral, recovering from his illness, discovered what was on foot. He dealt promptly and firmly with it in his quarterdeck manner, which was always far more effective than his viceregal manner. Diaz was imprisoned and lodged in chains on board one of the ships, to be sent to Spain for trial; and the other ringleaders were punished also according to their deserts. The guns and ammunition were all stored together on one ship under a safe guard, and the mutiny was stamped out. But the Spaniards did not love Columbus any the better for it; did not any the more easily forgive him for being in command of them and for being a foreigner.

But it would never do for the colony to stagnate in Isabella, and Columbus decided to make a serious attempt, not merely to discover the gold of Cibao, but to get it. He therefore organised a military expedition of about 400 men, including artificers, miners, and carriers, with the little cavalry force that had been brought out from Spain. Every one who had armour wore it, flags and banners were carried, drums and trumpets were sounded; the horses were decked out in rich caparisons, and as glittering and formidable a show was made as possible....