Christopher Columbus and the New World of His Discovery - Volume 3 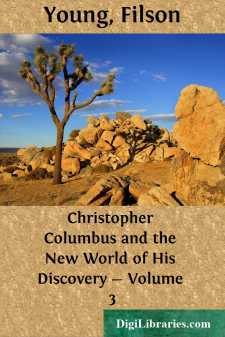 CHAPTER I THE ENCHANTED ISLANDS

Columbus did not intend to remain long at San Salvador. His landfall there, although it signified the realisation of one part of his dream, was only the starting-point of his explorations in the New World. Now that he had made good his undertaking to "discover new lands," he had to make good his assurance that they were full of wealth and would swell the revenues of the King and Queen of Spain. A brief survey of this first island was all he could afford time for; and after the first exquisite impression of the white beach, and the blue curve of the bay sparkling in the sunshine, and the soft prismatic colours of the acanthus beneath the green wall of the woods had been savoured and enjoyed, he was anxious to push on to the rich lands of the Orient of which he believed this island to be only an outpost.

On the morning after his arrival the natives came crowding down to the beach and got down their canoes, which were dug out of the trunk of a single tree, and some of which were large enough to contain forty or forty-five men: They came paddling out to the ship, sometimes, in the case of the smaller canoes which only held one man, being upset by the surf, and swimming gaily round and righting their canoes again and bailing them out with gourds. They brought balls of spun cotton, and parrots and spears. All their possessions, indeed, were represented in the offerings they made to the strangers. Columbus, whose eye was now very steadily fixed on the main chance, tried to find out if they had any gold, for he noticed that some of them wore in their noses a ring that looked as though it were made of that metal; and by making signs he asked them if there was any more of it to be had. He understood them to say that to the south of the island there dwelt a king who had large vessels of gold, and a great many of them; he tried to suggest that some of the natives should come and show him the way, but he "saw that they were not interested in going."

The story of the Rheingold was to be enacted over again, and the whole of the evils that followed in its glittering train to be exemplified in this voyage of discovery. To the natives of these islands, who guarded the yellow metal and loved it merely for its shining beauty, it was harmless and powerless; they could not buy anything with it, nor did they seek by its aid to secure any other enjoyments but the happiness of looking at it and admiring it. As soon as the gold was ravished from their keeping, however, began the reign of lust and cruelty that always has attended and always will attend the knowledge that things can be bought with it. In all its history, since first it was brought up from the dark bowels of the earth to glitter in the light of day, there is no more significant scene than this that took place on the bright sands of San Salvador so long ago—Columbus attentively examining the ring in the nose of a happy savage, and trying to persuade him to show him the place that it was brought from; and the savage "not interested in going."