Christopher Columbus and the New World of His Discovery - Complete 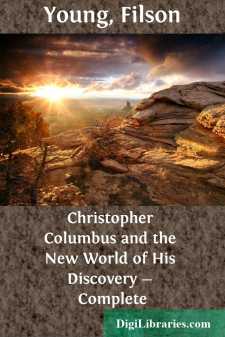 The writing of historical biography is properly a work of partnership, to which public credit is awarded too often in an inverse proportion to the labours expended. One group of historians, labouring in the obscurest depths, dig and prepare the ground, searching and sifting the documentary soil with infinite labour and over an area immensely wide. They are followed by those scholars and specialists in history who give their lives to the study of a single period, and who sow literature in the furrows of research prepared by those who have preceded them. Last of all comes the essayist, or writer pure and simple, who reaps the harvest so laboriously prepared. The material lies all before him; the documents have been arranged, the immense contemporary fields of record and knowledge examined and searched for stray seeds of significance that may have blown over into them; the perspective is cleared for him, the relation of his facts to time and space and the march of human civilisation duly established; he has nothing to do but reap the field of harvest where it suits him, grind it in the wheels of whatever machinery his art is equipped with, and come before the public with the finished product. And invariably in this unequal partnership he reaps most richly who reaps latest.

I am far from putting this narrative forward as the fine and ultimate product of all the immense labour and research of the historians of Columbus; but I am anxious to excuse myself for my apparent presumption in venturing into a field which might more properly be occupied by the expert historian. It would appear that the double work of acquiring the facts of a piece of human history and of presenting them through the medium of literature can hardly ever be performed by one and the same man. A lifetime must be devoted to the one, a year or two may suffice for the other; and an entirely different set of qualities must be employed in the two tasks. I cannot make it too clear that I make no claim to have added one iota of information or one fragment of original research to the expert knowledge regarding the life of Christopher Columbus; and when I add that the chief collection of facts and documents relating to the subject, the 'Raccolta Columbiana,'—[Raccolta di Documenti e Studi Publicati dalla R. Commissione Colombiana, etc. Auspice il Ministero della Publica Istruzione. Rome, 1892-4.]—is a work consisting of more than thirty folio volumes, the general reader will be the more indulgent to me. But when a purely human interest led me some time ago to look into the literature of Columbus, I was amazed to find what seemed to me a striking disproportion between the extent of the modern historians' work on that subject and the knowledge or interest in it displayed by what we call the general reading public. I am surprised to find how many well-informed people there are whose knowledge of Columbus is comprised within two beliefs, one of them erroneous and the other doubtful: that he discovered America, and performed a trick with an egg. Americans, I think, are a little better informed on the subject than the English; perhaps because the greater part of modern critical research on the subject of Columbus has been the work of Americans. It is to bridge the immense gap existing between the labours of the historians and the indifference of the modern reader, between the Raccolta Columbiana, in fact, and the story of the egg, that I have written my narrative.

It is customary and proper to preface a work which is based entirely on the labours of other people with an acknowledgment of the sources whence it is drawn; and yet in the case of Columbus I do not know where to begin. In one way I am indebted to every serious writer who has even remotely concerned himself with the subject, from Columbus himself and Las Casas down to the editors of the Raccolta. The chain of historians has been so unbroken, the apostolic succession, so to speak, has passed with its heritage so intact from generation to generation, that the latest historian enshrines in his work the labours of all the rest. Yet there are necessarily some men whose work stands out as being more immediately seizable than that of others; in the period of whose care the lamp of inspiration has seemed to burn more brightly....