Christology of the Old Testament: And a Commentary on the Messianic Predictions, Vol. 1 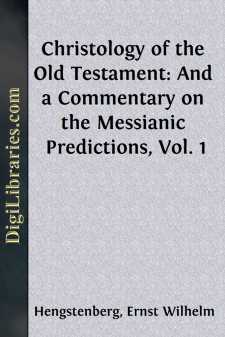 In the Messianic prophecies contained in Genesis we cannot fail to perceive a remarkable progress in clearness and definiteness.

The first Messianic prediction, which was uttered immediately after the fall of Adam, is also the most indefinite. Opposed to the awful threatening there stands the consolatory promise, that the dominion of sin, and of the evil arising from sin, shall not last for ever, but that the seed of the woman shall, at some future time, overthrow their dreaded conqueror. With the exception of the victory itself, everything is here left undetermined. We are told neither the mode in which it is to be achieved, nor whether it shall be accomplished by some peculiarly gifted race, or family of the progeny of the woman, or by some single individual from among her descendants. There is nothing more than a very slight hint that the latter will be the case.

After the destruction of a whole sinful world, when only Noah with his three sons had been left, the general promise is, to a certain extent, defined. Deliverance is to come from the descendants of Shem; Japhet shall become a partaker of this deliverance; Ham is passed over in silence.

The prophecy becomes still more definite when the Lord begins to prepare the way for the appearance of this deliverance, by separating from the corrupt mass a single individual—Abraham—in order to make him the depositary of His revelations. The Lord, moreover, according to the good pleasure of His will, further specifies which of the descendants of Abraham, to the exclusion of all the rest, is to inherit this dignity, with all its accompanying blessings. From among the posterity of Shem, the Lord sets apart first the family of Abraham, then that of Isaac, and lastly that of Jacob, as the family from which salvation is to come. Yet even these predictions, distinct though they be when compared with those previously uttered, are still very indefinite when compared with those subsequently given, and when seen in the light of the actual fulfilment. Even in these, the blessing only is foretold, but not its author. It still remained a matter of uncertainty whether salvation should be extended to all the other nations of the earth through a single individual, or through an entire people descended from the Patriarchs. The former is obscurely indicated; but the mode in which the blessing was to be imparted was left in darkness.

This obscurity is partially removed by the last Messianic prophecy contained in Gen. xlix. 10. After what had previously taken place, we might well expect that the question as to which of Jacob's twelve sons should have the privilege of becoming the source of deliverance to the whole earth, would not be left undetermined; nor could we imagine that Jacob, when, just before his death, and with the spirit of a prophet, he transferred to his sons the promises which had been given to his ancestors and himself, should have passed over in silence the most important part of them. On the contrary, by being transferred to Judah, the promise of the Messiah acquires not only the expected limitation, but an unexpected increase of clearness and precision....