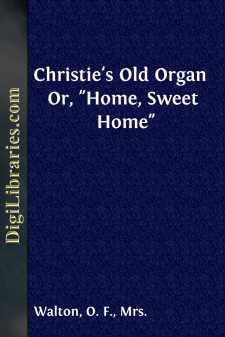 It was a very dark, uncomfortable place, and as the lodgers in the lower room turned over on their wretched beds, many of which were merely bare wooden benches, it may be that one and another gave a sigh as he thought how far he was from "Home, sweet home."

But the organ played on, though the hour was late, and the dip candle was put out, and the fire was dying away. If you had climbed the crooked staircase, you would have seen an old man sitting alone in his attic, and smiling at his organ as he turned it with a trembling hand.

Old Treffy loved his barrel-organ; it was the one comfort of his life. He was a poor, forlorn old man, without a friend in the world. Every one that he had loved was dead; he had no one to whom he could talk, or to whom he could tell his troubles, and thus he gathered up all the remaining bits and fragments of love in his old heart, faded and withered though they were, and he gave them all to his old organ, which had well-nigh seen as many summers as he had. It was getting very antiquated and old-fashioned now; the red silk in front of it was very soiled and worn, and it could not play any of the new tunes of which the children were so fond. It sometimes struck old Treffy that he and his organ were very much alike,—they were getting altogether behind the age; and people looked down upon them and pushed past them, as they hurried along the street. And though old Treffy was very patient, yet he could not help feeling this.

He had felt it very much on the day of which I am writing. It was cold, dismal weather; a cutting east wind had swept round the corners of the streets, and had chilled the old man through and through. His threadbare coat could not keep it out; how could he expect it to do so, when he had worn it so many years he could scarcely count them? His thin, trembling old hands were so benumbed with cold that he could scarcely feel the handle of the organ, and, as he turned it, he made sundry little shakes and quavers in the tune, which were certainly not intended by the maker of the old barrel-organ.

There was not much variety in the tunes old Treffy could play. There was the "Old Hundredth," and "Poor Mary Ann," and "Rule Britannia;" the only other one was "Home, sweet Home," but that was old Treffy's favorite. He always played it very slowly, to make it last longer, and on this cold day the shakes and the quavers in it sounded most pathetic.

But no one took much notice of old Treffy or his organ. A little crowd of children gathered round him, and asked him for all sorts of new tunes of which he had never even heard the names.

They did not seem to care for "Home, sweet Home," or the "Old Hundredth," and soon moved away....