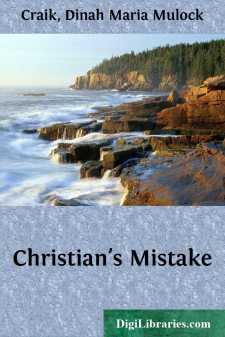 "So I will do my best a gude wife to be, For Auld Robin Grey is vera kind to me."

"I think this will do, my dear; just listen;" and in a mysterious half whisper, good Mrs. Ferguson, wife of James Ferguson, the well-to-do silversmith and jeweler, of High Street, Avonsbridge, read aloud from the sheet of paper in her hand:

"'On the 21st instant, at the University Church, Avonsbridge, by theReverend John Smith, the Reverend Arnold Grey, D.D., Master ofSaint Bede's College, Avonsbridge, to Christian, only child of the lateEdward Oakley, Esq., of that place.' Will it do? Because, if so, Jameswill send it to 'The Times' at once."

As she spoke, Dr. Grey turned round from the window where he had been conversing—that is, responding to conversation—with Mr. Ferguson, chiefly on the weather; for it was a snowy December day.

This precise moment, half an hour after his marriage—his second marriage—is hardly a fair time to describe Dr. Arnold Grey; suffice it to say that he was a gentleman apparently about forty-five, rather low in stature, and spare in figure, with hair already thin and iron-gray. The twenty-five years between him and his newly-married wife showed plainly—only too plainly—as she stood, in all her gracefulness of girlhood, which even her extreme pallor and a certain sharp, worn, unnaturally composed look could not destroy. He seemed struck by this. His face clouded over for a minute, and he slightly sighed. But the pain, whatever it was, was only momentary. He looked like a man who was not in the habit of acting hastily or impulsively—who never did any thing without having previously fully counted the cost.

"What were you saying, Mrs. Ferguson?" said he, addressing her with the grave and somewhat formal politeness which was his natural manner, but which always somewhat awed that rather vulgar, though kind-hearted and well-meaning woman.

She put the paper into his hands. "It's the notice for 'The Times;' James and I made it up last night. James thought it would save you trouble, master—" Mrs. Ferguson always hesitated between this common University custom of address and plain, "Dr. Grey."

"Thank you; Mr. Ferguson is always kind," returned the Master of SaintBede's.

"You see," continued Mrs. Ferguson, lowering her tone to a confidential whisper, "I thought it was better only to put 'Edward Oakley, Esq.,' and nothing more. Wouldn't you like it to be so, sir?"

"I should like it to be exactly as—" he paused, and the color rushed violently over his thin, worn, and yet sensitive face, as sensitive as if he had been a young man still—"exactly as Mrs. Grey pleases."

Mrs. Grey! At the sound of her new name Christian started, and she, too, turned scarlet. Not the sweet, rosy blush of a bride, but the dark red flush of sharp physical or mental pain, which all her self-control could not hide.

"Poor dear! poor dear! this is a great change for her, and only a year since her father died," said Mrs....