Christianity As Mystical Fact And The Mysteries of Antiquity 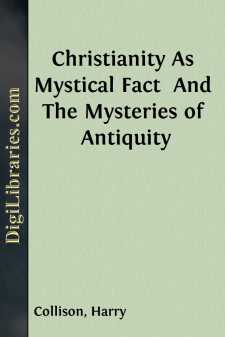 Christianity as Mystical Fact was the title given by the author to this work, when, eight years ago, he gathered into it the substance of lectures delivered by him in 1902. The title indicated the special character of the book. In it the attempt was made, not merely to represent historically the mystical content of Christianity, but to describe the origin of Christianity from the standpoint of mystical contemplation. Underlying this intention was the thought that at the genesis of Christianity mystical facts were at work which can only be perceived by such contemplation.

It is only the book itself which can make clear that by "mystical" its author does not imply a conception which relies more on vague feelings than on "strictly scientific statements." It is true that "mysticism" is at present widely understood in the former sense, and hence it is declared by many to be a sphere of the human soul-life with which "true science" can have nothing to do. In this book the word "mysticism" is used in the sense of the representation of a spiritual fact, which can only be recognised in its true nature when the knowledge of it is derived from the sources of spiritual life itself. If the kind of knowledge drawn from such sources is rejected, the reader will not be in a position to judge of the contents of this book. Only one who allows that the same clearness may exist in mysticism as in a true representation of the facts of natural science, will be ready to admit that the content of Christianity as mysticism may also be mystically described. For it is not only a question of the contents of the book, but first and foremost of the methods of knowledge by means of which the statements in it are made.

Many there are in the present day who have a most violent dislike to such methods, which are regarded as conflicting with the ways of true science. And this is not only the case with those willing to admit other interpretations of the world than their own, on the ground of "genuine knowledge of natural science," but also with those who as believers wish to study the nature of Christianity.

The author of this book stands on the ground of a conception which sees that the achievements of natural science in our age must lead up into true mysticism. In fact, any other attitude as regards knowledge actually contradicts everything presented by the achievements of natural science. The facts of natural science itself indeed cannot be comprehended by means of those methods of knowledge which so many people would like to employ to the exclusion of others, under the illusion that they stand on the firm ground of natural science. It is only when we are prepared to admit that a full appreciation of our present admirable knowledge of nature is compatible with genuine mysticism, that we can take the contents of this book into consideration.