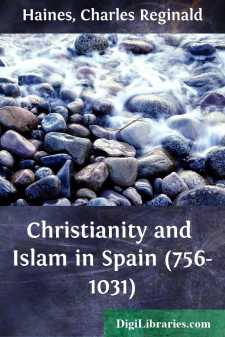 CHAPTER I. THE GOTHS IN SPAIN.

Just about the time when the Romans withdrew from Britain, leaving so many of their possessions behind them, the Suevi, Alani, and Vandals, at the invitation of Gerontius, the Roman governor of Spain, burst into that province over the unguarded passes of the Pyrenees. Close on their steps followed the Visigoths; whose king, taking in marriage Placidia, the sister of Honorius, was acknowledged by the helpless emperor independent ruler of such parts of Southern Gaul and Spain as he could conquer and keep for himself. The effeminate and luxurious provincials offered practically no resistance to the fierce Teutons. No Arthur arose among them, as among the warlike Britons of our own island; no Viriathus even, as in the struggle for independence against the Roman Commonwealth. Mariana, the Spanish historian, asserts that they preferred the rule of the barbarians. However this may be, the various tribes that invaded the country found no serious opposition among the Spaniards: the only fighting was between themselves—for the spoil. Many years of warfare were necessary to decide this important question of supremacy. Fortunately for Spain, the Vandals, who seem to have been the fiercest horde and under the ablest leader, rapidly forced their way southward, and, passing on to fresh conquests, crossed the Straits of Gibraltar in 429: not, however, before they had utterly overthrown their rivals, the Suevi, on the river Baetis, and had left an abiding record of their brief stay in the name Andalusia.

For a time it seemed likely that the Suevi, in spite of their late crushing defeat, would subject to themselves the whole of Spain, but under Theodoric II. and Euric, the Visigoths definitely asserted their superiority. Under the latter king the Gothic domination in Spain may be said to have begun about ten years before the fall of the Western Empire. But the Goths were as yet by no means in possession of the whole of Spain. A large part of the south was held by imperialist troops; for, though the Western Empire had been extinguished in 476, the Eastern emperor had succeeded by inheritance to all the outlying provinces, which had even nominally belonged to his rival in the West. Among these was some portion of Spain.

It was not till 570, the year in which Mohammed was born, that a king came to the Gothic throne strong enough to crush the Suevi and to reduce the imperialist garrisons in the South; and it was not till 622, the very year of the Flight from Mecca, that a Gothic king, Swintila, finally drove out all the Emperor's troops, and became king in reality of all Spain.

Scarcely had this been well done, when we perceive the first indications of the advent of a far more terrible foe, the rumours of whose irresistible prowess had marched before them. The dread, which the Arabs aroused even in distant Spain as early as a century after the birth of Mohammed, may be appreciated from the despairing lines of Julian, bishop of Toledo:—