Christianity and Ethics A Handbook of Christian Ethics 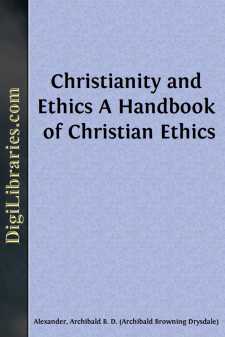 INTRODUCTION A PLEA FOR THE STUDY OF CHRISTIAN ETHICS

If, as Matthew Arnold says, conduct is three-fourths of life, then a careful inquiry into the laws of conduct is indispensable to the proper interpretation of the meaning and purpose of life. Conduct of itself, however, is merely the outward expression of character; and character again has its roots in personality; so that if we are to form a just conception of life we have to examine the forces which shape human personality and raise it to its highest power and efficiency. In estimating the value of man all the facts of consciousness and experience must be considered. Hence no adequate account of the end of life can be given without regard to that which, if it is true, must be the most stupendous fact of history—the fact of Christ.

If the Christian is a man to whom no incident of experience is secular and no duty insignificant, because all things belong to God and all life is dominated by the spirit of Christ, then Christian Ethics must be the application of Christianity to conduct; and its theme must be the systematic study of the ideals and forces which are alone adequate to shape character and fit man for the highest conceivable destiny—fellowship with, and likeness to, the Divine Being in whose image he has been made. This, of course, may be said to be the aim of all theology. The theologian must not be content to discuss merely speculative problems about God and man. He must seek above {2} all things to bring the truths of revelation to bear upon human practice. All knowledge has its practical implicate. The dogma which cannot be translated into duty is apt to be a vague abstraction.

In all ages there has been a tendency to separate truth and duty. But knowledge has two sides; it is at once a revelation and a challenge. There is no truth which has not its corresponding obligation, and no obligation which has not its corresponding truth. And not until every truth is rounded into its duty, and every duty is referred back into its truth shall we attain to that clearness of vision and consistency of moral life, to promote which is the primary task of Christian Ethics.

It is this practical element which gives to the study of morals its justification and makes it specially important for the Christian teacher. In this sense Ethics is really the crown of theology and ought to be the end of all previous study.

As a separate branch of study Christian Ethics dates only from the Reformation. It was natural, and perhaps inevitable that the first efforts of the Church should be occupied with the formation and elaboration of dogma. With a few notable exceptions, among whom may be mentioned Basil, Clement, Alquin and Thomas Aquinas, the Church fathers and schoolmen paid but scanty attention to the ethical side of religion. It was only after the Reformation that theology, Roman and Protestant alike, was divided into different branches. The Roman Catholic name for what we style Ethics is 'moral philosophy,' which, however, consists mainly of directions for father confessors in their dealing with perplexed souls....