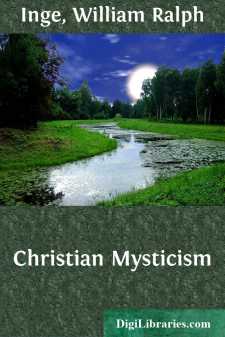 "Beloved, now are we children of God, and it is not yet made manifest what we shall be. We know that, if He shall be manifested, we shall be like Him; for we shall see Him even as He is."—I JOHN iii. 2, 3.

No word in our language—not even "Socialism"—has been employed more loosely than "Mysticism." Sometimes it is used as an equivalent for symbolism or allegorism, sometimes for theosophy or occult science; and sometimes it merely suggests the mental state of a dreamer, or vague and fantastic opinions about God and the world. In Roman Catholic writers, "mystical phenomena" mean supernatural suspensions of physical law. Even those writers who have made a special study of the subject, show by their definitions of the word how uncertain is its connotation.[2] It is therefore necessary that I should make clear at the outset what I understand by the term, and what aspects of religious life and thought I intend to deal with in these Lectures.

The history of the word begins in close connexion with the Greek mysteries.[3] A mystic [Greek: mystês] is one who has been, or is being, initiated into some esoteric knowledge of Divine things, about which he must keep his mouth shut ([Greek: myein]); or, possibly, he is one whose eyes are still shut, one who is not yet an [Greek: epoptês].[4] The word was taken over, with other technical terms of the mysteries, by the Neoplatonists, who found in the existing mysteriosophy a discipline, worship, and rule of life congenial to their speculative views. But as the tendency towards quietism and introspection increased among them, another derivation for "Mysticism" was found—it was explained to mean deliberately shutting the eyes to all external things.[5] We shall see in the sequel how this later Neoplatonism passed almost entire into Christianity, and, while forming the basis of mediæval Mysticism, caused a false association to cling to the word even down to the Reformation.[6]

The phase of thought or feeling which we call Mysticism has its origin in that which is the raw material of all religion, and perhaps of all philosophy and art as well, namely, that dim consciousness of the beyond, which is part of our nature as human beings....