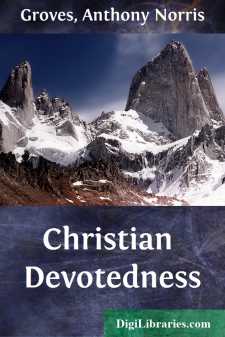 In sending a second impression of the following little work into the world after a lapse of four years from the publication of the former edition, it may be right to state, that my views on the subject of it, have undergone no change in the way of relinquishment; but on the contrary the experience of every day in my own history,--every observation I have been able to make on the history of those with whom I have come into the closest contact, and who have either received or rejected the view, and in whatever degree, has tended exceedingly to strengthen the conviction on my mind, of the infinitely deep knowledge of the human heart, and springs of human actions which these injunctions of our Blessed Lord manifest: and that he means simply what he says in "Lay not up for yourselves treasures upon earth," etc. There is an eye-salve in this doctrine, when received by faith, that wonderfully clears the field of our spiritual perceptions; therefore, he that can receive it, let him receive it. Many more, certainly, have been influenced by it, and some to a much greater extent than I had expected; and the clusters that have adorned their branches seem to be of the true Eschol grapes; however, of these, and many other things, time will be the manifester, and the Lord the judge.

The principal objections urged, seem to arrange themselves under three heads:--The influence of which this principle would rob the Church;--the children it would leave without a provision;--and that it would require those having estates to sell them, and would not be satisfied with the dedication of the interest or profits arising out of such property. My business, however, is not with the consequences of the precept, but with the precept itself. Yet still I would say, there is in this reasoning as deistical a disregard of the Lord's especial government of his Church and people, as could be expected from an infidel.

I purpose publishing, the Lord sparing me, a few remarks separately, in relation to the first of these subjects--that of Influence;--the nature of that which is Christian, and its distinction from that which is worldly, and which operates either upon worldly men, or that worldliness which still adheres to every one of us. And I shall endeavour to show, that a grain of the pure gold of Christian influence, which is the exhibition, in truth, of the mind of Christ, springing from the love of Christ in the soul, is no wise increased in value by being beaten out into plates as thin as imagination can conceive, and employed to gild the brassy admixture of earthly influence,--the titles, honours, rank, wealth, learning and secular power of this world. It looks indeed like a mighty globe of gold; and the eyes of the inexperienced may be caught by it; but the least scratch proves its brassy character. If this simple principle had been perceived, how differently would many public religious bodies have been constituted for the purpose of extending the influence of Christ's Kingdom.

With regard to the other two points, I feel they may be disposed of under one general argument, which is this: That the principle of God's government is paternal; and therefore its primary object is the development in us of the character of dear children, the essential feature of which is unlimited dependence. But, of course, this relation implies its co-relative, the Fatherly character of God; and the least entrenchment upon daily dependence for daily provision, either for temporal or spiritual supplies, affects God's honour in this character. Then, as to our children, David knew that they shall not beg their bread--at least, that he, who had been young and then was old, had not seen such a thing; and to suspect such a thing, is to suspect the perfection of the Fatherly character of God; of whom our blessed Lord said, "Your Father knoweth you have need of all these things," and, therefore, "all these things shall be added unto you." As to capital and estates, after knowing that our loving Father will supply us in every need, the sooner we are disencumbered by disbursement, for His honour, and His service, the better; for then we shall have the happiness of seeing it spent for the glory of Him chose it is, and for whom we are only stewards; whereas were we to die to-morrow, we do not know whether the capital and estates may fall into the hands of a wise man or a fools so that we may be cut of after spending part of a year's income for God--say one hundred, out of a thousand pounds, and this, I think, would be called Christian devotedness by many--and the fool comes in and spends the whole residue, twenty thousand pounds perhaps, for Satan and the corruption of the world....