Christ, Christianity and the Bible 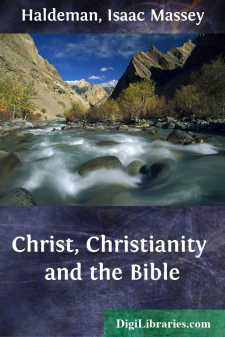 IF NOT GOD—NOT GOOD

THE world has accepted Jesus Christ as a good man.

The evidences of his goodness are manifold.

He was full of compassion.

He never looked upon the people as a crowd. He never thought of them as a mass. He saw them always as individuals. His heart went out to them. All his impulses were to pity them, sympathize with, and help them.

He went among them. He entered into all conditions, accepted all situations. He was present at a wedding, he ate with publicans and sinners and, anon, was guest at a rich man’s table.

He saw the ravages of disease, the shame of sin, the tragedies in life.

He knew there was torture in body and anguish in spirit.

He took the mystery of pain and laid it upon his heart, until tears were his meat and his drink, by day and by night. He became a man of sorrows and an expert in grief. He took upon him the woes of the world till he was bowed and bent, as with the weight of years. The tears of sympathy grooved his cheeks, as when streams carve their way down mountain sides. Because of this men looked at him and saw neither form nor comeliness; neither was there any beauty in him that they should desire him.

He was a beneficent man.

Multitudes of men are benevolent, but not beneficent.

Benevolence is well wishing. Beneficence is well doing. He was always well doing, giving sight to the blind, healing the sick, cleansing the leper, feeding the hungry, raising the dead, unloosing the bonds of Satan—unwinding the serpent’s coil.

He was absolutely unselfish.

He emptied himself and made room in his soul for other lives. He had no office hours and never interposed secretaries or major-domos between himself and the people. He received all who came unto him—ministering without money and without price.

There is one scene that might well be painted by a master hand.

It is evening. The western sky is all aglow with the glory of the setting sun. Far up in the dome of the infinite blue, the evening star swings golden, like a slow descending lamp let down by invisible hands. The street is in half-tone. It is packed by the strangest of throngs, by the blind, the lame, the halt, the paralyzed and the leper-derelicts of humanity—borne thither on a surging tide of life in which every wave is an accent of pain; they are driven and piled up in great, quivering heaps against a door which is partly shut, as in self-defence, by the sweltering crowd within.

Jesus of Nazareth is in that house.

He is healing the sick. He is giving health, and strength, and peace to all who seek him. He turns no one away. Compassion, sympathy, beneficence, the tenderness of a mother for her helpless babe—these are the characteristics which his daily ministry revealed.

No one ever brought a charge of evil doing or evil speaking against him.

The people who followed him said, “He hath done all things well.”

Police officers sent to arrest him as a disturber of the peace found him in the midst of the people, speaking words that hushed their tumult, quieted their murmurings and gave them rest; and the officers returning to them who sent them, said, “Never man spake like this man.”

Pilate’s wife dreamed a troubled dream of him, and sent word to her husband not to lay hands on him—seeing that he was a just man....