Chopin : the Man and His Music 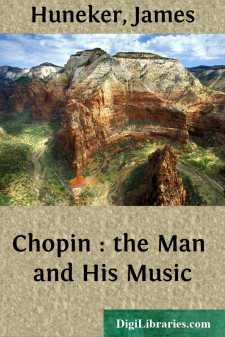 Gustave Flaubert, pessimist and master of cadenced lyric prose, urged young writers to lead ascetic lives that in their art they might be violent. Chopin's violence was psychic, a travailing and groaning of the spirit; the bright roughness of adventure was missing from his quotidian existence. The tragedy was within. One recalls Maurice Maeterlinck: "Whereas most of our life is passed far from blood, cries and swords, and the tears of men have become silent, invisible and almost spiritual." Chopin went from Poland to France—from Warsaw to Paris—where, finally, he was borne to his grave in Pere la Chaise. He lived, loved and died; and not for him were the perils, prizes and fascinations of a hero's career. He fought his battles within the walls of his soul—we may note and enjoy them in his music. His outward state was not niggardly of incident though his inner life was richer, nourished as it was in the silence and the profound unrest of a being that irritably resented every intrusion. There were events that left ineradicable impressions upon his nature, upon his work: his early love, his sorrow at parting from parents and home, the shock of the Warsaw revolt, his passion for George Sand, the death of his father and of his friend Matuszynski, and the rupture with Madame Sand—these were crises of his history. All else was but an indeterminate factor in the scheme of his earthly sojourn. Chopin though not an anchorite resembled Flaubert, being both proud and timid; he led a detached life, hence his art was bold and violent. Unlike Liszt he seldom sought the glamor of the theatre, and was never in such public view as his maternal admirer, Sand. He was Frederic Francois Chopin, composer, teacher of piano and a lyric genius of the highest range.

Recently the date of his birth has been again discussed by Natalie Janotha, the Polish pianist. Chopin was born in Zelazowa-Wola, six miles from Warsaw, March 1, 1809. This place is sometimes spelled Jeliasovaya-Volia. The medallion made for the tomb by Clesinger—the son-in-law of George Sand—and the watch given by the singer Catalan! in 1820 with the inscription "Donne par Madame Catalan! a Frederic Chopin, age de dix ans," have incited a conflict of authorities. Karasowski was informed by Chopin's sister that the correct year of his birth was 1809, and Szulc, Sowinski and Niecks agree with him. Szulc asserts that the memorial in the Holy Cross Church, Warsaw—where Chopin's heart is preserved—bears the date March 2, 1809. Chopin, so Henry T. Finck declares, was twenty-two years of age when he wrote to his teacher Elsner in 1831. Liszt told Niecks in 1878 that Karasowski had published the correct date in his biography. Now let us consider Janotha's arguments. According to her evidence the composer's natal day was February 22, 1810 and his christening occurred April 28 of the same year. The following baptismal certificate, originally in Latin and translated by Finck, is adduced. It is said to be from the church in which Chopin was christened: "I, the above, have performed the ceremony of baptizing in water a boy with the double name Frederic Francois, on the 22d day of February, son of the musicians Nicolai Choppen, a Frenchman, and Justina de Krzyzanowska his legal spouse....