Chopin and Other Musical Essays 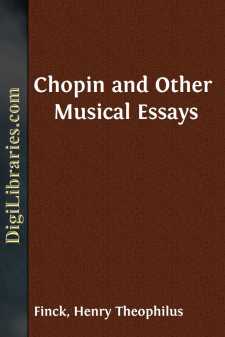 I CHOPIN THE GREATEST GENIUS OF THE PIANOFORTE

Leipsic, the centre of the world's music trade, exports about one hundred thousand dollars' worth of music to America every year. I do not know how much of this sum is to be placed to the account of Chopin, but a leading music dealer in New York told me that he sold three times as many of Chopin's compositions as of any other romantic or classical composer. This seems to indicate that Chopin is popular. Nevertheless, I believe that what Liszt wrote in 1850, a year after the death of Chopin—that his fame was not yet as great as it would be in the future—is as true to-day as it was forty years ago. Chopin's reputation has been constantly growing, and yet many of his deepest and most poetic compositions are almost unknown to amateurs, not to speak of the public at large. A few of his least characteristic pieces are heard in every parlor, generally in a wofully mutilated condition, but some of his most inspired later works I have never heard played either in private or in the concert hall, although I am sure that if heard there they would be warmly applauded.

There is hardly a composer concerning whom so many erroneous notions are current as concerning Chopin, and of all the histories of music I have seen that of Langhans is the only one which devotes to Chopin an amount of space approximately proportionate to his importance. One of the most absurd of the misconceptions is that Chopin's genius was born in full armor, and that it did not pass through several stages of development, like that of other composers. Chopin did display remarkable originality at the very beginning, but the apparent maturity of his first published works is due to the fact that he destroyed his earliest efforts and disowned those works which are known as posthumous, and which may have created confusion in some minds by having received a higher "opus" number than his last works.

Another misconception regarding Chopin is that his latest works are morbid and unintelligible. The same charge was brought by philistines against the best works of Beethoven, Schumann, and Wagner. The fact is that these last works are of an almost matchless harmonic depth and originality, as superior to his earlier works as Wagner's last music dramas are to his first operas. I make this comparison with Wagner advisedly because, although I have the most exalted notions of Wagner's grandeur and importance, I do not for a moment hesitate to say that in his own sphere Chopin is quite as original and has been almost as revolutionary and epoch-making as Wagner. Schumann was the first to recognize the revolutionary significance of Chopin's style. "Chopin's works," he says, "are cannons buried in flowers;" and in another place he declares that he can see in "Chopin's G minor Nocturne a terrible declaration of war against a whole musical past." Chopin, himself, modest as he was in his manners, wrote to his teacher Elsner, in 1831, when he was twenty-two years of age: "Kalkbrenner will not be able to break my perhaps bold but noble determination to create a new epoch in art."

Now, why has the world been so slow in recognizing that Chopin stands in the very front rank of creative musicians?...