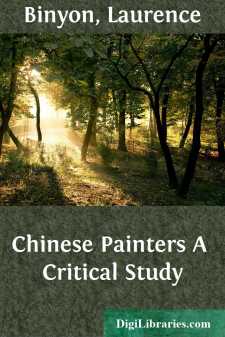 Whatever its outward expression, human thought remains essentially unchanged and, throughout all of its manifestations, is fundamentally the same. Varying phases are but accidents and underneath the divers wrappings of historic periods or different civilizations, the heart as well as the mind of man has been moved by the same desires.

Art possesses a unity like that of nature. It is profound and stirring, precisely because it blends and perpetuates feeling and intelligence by means of outward expressions. Of all human achievements art is the most vital, the one that is dowered with eternal youth, for it awakens in the soul emotions which neither time nor civilization has ever radically altered. Therefore, in commencing the study of an art of strange appearance, what we must seek primarily is the exact nature of the complexity of ideas and feelings upon which it is based. Such is the task presented to us, and since the problem which we here approach is the general study of Chinese painting, we must prepare ourselves first to master the peculiarities of its appearance and technique, in order to understand later on the motives which inspired it.

While the first part of this study will carry us far from our habitual modes of thought, the second part will bring us back into a domain which our own philosophies, sciences and arts have already made familiar. Admittedly, Chinese painting is governed by distinctive ideas. Born of a civilization vastly different from our own, it may at times appear in a guise that seems incomprehensible. It would be astonishing, however, if Western intelligence were unable to grasp an aesthetic code of a magnitude which is too great to be ignored.

The progress of history and of criticism has given us the opportunity to reach a comprehension of the most peculiar formulas. Our culture is sufficiently broad to allow us to perceive the beauty of an Egyptian fresco or an Assyrian bas-relief as well as of a Byzantine mosaic or a painting of the Renaissance. We have therefore no excuse for remaining inaccessible to the art of the Far East and we have surely all the mental vigor that is requisite in order to accustom ourselves to the foreign nature of its presentation. It is in the realm of painting that this foreign element is most noticeable. This is due partly to a special technique and partly to the nature of the doctrines which serve as its inspiration.

It behooves us then to acquaint ourselves with these new aspects of the human soul. That is the justification for this little book. It forms an introduction in which gaps are shown without attempt at concealment and is presented in all modesty.

PART ONETECHNIQUE I. EQUIPMENT OF THE PAINTER

Where our painters have chosen wood or canvas as a ground, the Chinese have employed silk or paper. While our art recognizes that drawing itself, quite apart from painting, is a sufficient objective, drawing and painting have always been closely intermingled in the Far East. While the mediums used in Europe for painting in color, distemper, tempera and oil, led to an exact study of form, the colors employed by the Orientals—at times brilliant, at times subdued with an almost studied restraint—preserved a singular fluidity and lent themselves to undefined evanescences which gave them a surprising charm....