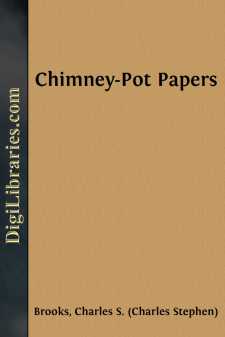 y windows look across the roofs of the crowded city and my thoughts often take their suggestion from the life that is manifest at my neighbors' windows and on these roofs.

Across the way, one story lower than our own, there dwells "with his subsidiary parents" a little lad who has been ill for several weeks. After his household is up and dressed I regularly discover him in bed, with his books and toys piled about him. Sometimes his knees are raised to form a snowy mountain, and he leads his paper soldiers up the slope. Sometimes his kitten romps across the coverlet and pounces on his wriggling toes; and again sleeps on the sunny window-sill. His book, by his rapt attention, must deal with far-off islands and with waving cocoanut trees. Lately I have observed that a yellow drink is brought to him in the afternoon—a delicious blend of eggs and milk—and by the zest with which he licks the remainder from his lips, it is a prime favorite of his. In these last few days, however, I have seen the lad's nose flat and eager on the window, and I know that he is convalescent.

At another set of windows—now that the days are growing short and there is need of lights—I see in shadowgraph against the curtains an occasional domestic drama. Tonight, by the appearance of hurry and the shifting of garments, I surmise that there is preparation for a party. Presently, when the upstairs lights have disappeared, I shall see these folk below, issuing from their door in glossy raiment. My dear sir and madame, I wish you an agreeable dinner and—if your tooth resembles mine—ice-cream for dessert.

The window of a kitchen, also, is opposite, and I often look on savory messes as they ripen on the fire—a stirring with a long iron spoon. This spoon is of such unusual length that even if one supped with the devil (surely the fearful adage cannot apply to our quiet street) he might lift his food in safety from the common pot.

A good many stories lower there is a bit of roof that is set with wicker furniture and a row of gay plants along the gutter. Here every afternoon exactly at six—the roof being then in shadow—a man appears and reads his evening paper. Later his wife joins him and they eat their supper from a tray. They are sunk almost in a well of buildings which, like the hedge of a fairy garden, shuts them from all contact with the world. And here they sit when the tray has been removed. The twilight falls early at their level and, like cottagers in a valley, they watch the daylight that still gilds the peaks above them.

There is another of these out-of-door rooms above me on a higher building. From my lower level I can see the bright canvas and the side of the trellis that supports it. Here, doubtless, in the cool breeze of these summer evenings, honest folk sip their coffee and watch the lights start across the city.

Thus, all around, I have glimpses of my neighbors—a form against the curtains—a group, in the season, around the fire—the week's darning in a rocker—an early nose sniffing at the open window the morning airs.

But it is these roofs themselves that are the general prospect.

Close at hand are graveled surfaces with spouts and whirling vents and chimneys. Here are posts and lines for washing, and a scuttle from which once a week a laundress pops her head. Although her coming is timed to the very hour—almost to the minute—yet when the scuttle stirs it is with an appearance of mystery, as if one of the forty thieves were below, boosting at the rocks that guard his cave. But the laundress is of so unromantic and jouncing a figure that I abandon the fancy when no more than her shoulders are above the scuttle. She is, however, an amiable creature and, if the wind is right, I hear her singing at her task. When clothespins fill her mouth, she experiments with popular tunes. One of these wooden bipeds once slipped inside and nearly strangled her.

In the distance, on the taller buildings, water tanks are lifted against the sky. They are perched aloft on three fingers, as it were, as if the buildings were just won to prohibition and held up their water cups in the first excitement of a novice to pledge the cause. Let hard liquor crouch and tremble in its rathskeller below the sidewalk!...