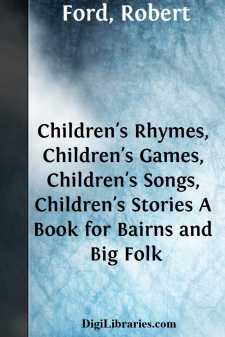 RHYMES OF THE NURSERY.

Writing on the subject of nursery rhymes more than half a century ago, the late Dr. Robert Chambers expressed regret because, as he said, "Nothing had of late been revolutionised so much as the nursery." But harking back on the period of his own childhood, he was able to say, with a feeling of satisfaction, that the young mind was then "cradled amidst the simplicities of the uninstructed intellect; and she was held to be the best nurse who had the most copious supply of song, and tale, and drollery, at all times ready to soothe and amuse her young charges. There were, it is true, some disadvantages in the system; for sometimes superstitious terrors were implanted, and little pains were taken to distinguish between what tended to foster the evil and what tended to elicit the better feelings of infantile nature. Yet the ideas which presided over the scene," he continues, "and rung through it all the day in light gabble and jocund song, were simple, often beautiful ideas, generally well expressed, and unquestionably suitable to the capacities of children.... There was no philosophy about these gentle dames; but there was generally endless kindness, and a wonderful power of keeping their little flock in good humour. It never occurred to them that children were anything but children—'Bairns are just bairns,' my old nurse would say—and they never once thought of beginning to make them men and women while still little more than able to speak." They did not; and, in the common homes of Scotland, they do not to this hour. The self-same rhymes and drollery which amused Dr. Chambers as a child are amusing and engaging the minds and exercising the faculties of children over all the land even now. I question if there is a child anywhere north of the Tweed who has not been entertained by

Or the briefer formula, referring only to the brow, the eye, the nose, and the mouth, which runs:—

Chap at the door, Keek in, Lift the sneck, Walk in.

And it was only the other evening that I saw a father with his infant son on his knee, having a little hand spread out, and entertaining its owner by travelling from thumb to little finger, and repeating the old catch:—

As well as its fellow-rhyme:—

Than the nonsense rhymes and capers that have delighted the nursery life of Scotland for many generations, none, of course, could be more delectable—none more suitable. While charming the sense, they have awakened imagination and developed poetic fancy in thousands who otherwise might have blundered into old age proving stolid and uninteresting men and women. They are, for this reason, part and parcel of every properly-balanced life, and the healthy and happy mind can never let them go.

What pleasing recollections of his own early childhood many a father has had when, sitting with his child on his knee, he has demonstrated and chanted that rude rhyme by the fireside o' nights far, as often has been the case, from the scene where he learned it! To know such is to realise one, at least, of the various reasons why the old delight in the frolics of the young.

This is a rhyme which "every child has joyed to hear." Its origin, as told in the records of the Boston (U.S.) Historical Society, is not more curious than beautiful and significant....