by United States District Court For The Eastern District Of Pennsylvania 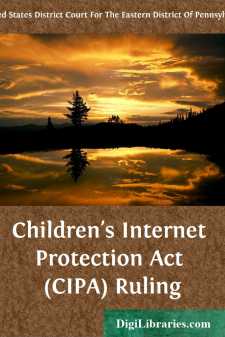 This case challenges an act of Congress that makes the use of filtering software by public libraries a condition of the receipt of federal funding. The Internet, as is well known, is a vast, interactive medium based on a decentralized network of computers around the world. Its most familiar feature is the World Wide Web (the "Web"), a network of computers known as servers that provide content to users. The Internet provides easy access to anyone who wishes to provide or distribute information to a worldwide audience; it is used by more than 143 million Americans. Indeed, much of the world's knowledge accumulated over centuries is available to Internet users almost instantly. Approximately 10% of the Americans who use the Internet access it at public libraries. And approximately 95% of all public libraries in the United States provide public access to the Internet.

While the beneficial effect of the Internet in expanding the amount of information available to its users is self-evident, its low entry barriers have also led to a perverse result – facilitation of the widespread dissemination of hardcore pornography within the easy reach not only of adults who have every right to access it (so long as it is not legally obscene or child pornography), but also of children and adolescents to whom it may be quite harmful. The volume of pornography on the Internet is huge, and the record before us demonstrates that public library patrons of all ages, many from ages 11 to 15, have regularly sought to access it in public library settings. There are more than 100,000 pornographic Web sites that can be accessed for free and without providing any registration information, and tens of thousands of Web sites contain child pornography. Libraries have reacted to this situation by utilizing a number of means designed to insure that patrons avoid illegal (and unwanted) content while also enabling patrons to find the content they desire. Some libraries have trained patrons in how to use the Internet while avoiding illegal content, or have directed their patrons to "preferred" Web sites that librarians have reviewed. Other libraries have utilized such devices as recessing the computer monitors, installing privacy screens, and monitoring implemented by a "tap on the shoulder" of patrons perceived to be offending library policy. Still others, viewing the foregoing approaches as inadequate or uncomfortable (some librarians do not wish to confront patrons), have purchased commercially available software that blocks certain categories of material deemed by the library board as unsuitable for use in their facilities. Indeed, 7% of American public libraries use blocking software for adults. Although such programs are somewhat effective in blocking large quantities of pornography, they are blunt instruments that not only "underblock," i.e., fail to block access to substantial amounts of content that the library boards wish to exclude, but also, central to this litigation, "overblock," i.e., block access to large quantities of material that library boards do not wish to exclude and that is constitutionally protected....