Children's Edition of Touching Incidents : and Remarkable Answers to Prayer

by S. B. (Solomon Benjamin) Shaw 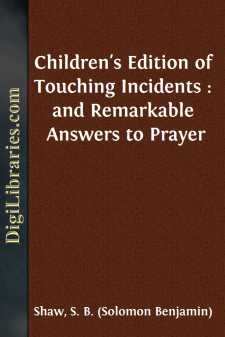 Truthfulness is a mark of Christianity. The heathen go astray, speaking lies as soon as they are born. In China a mother will give her boy a reward for the best falsehood that he can tell. Beginning so early, and regarding it such a fine thing to tell wrong stories, they become skillful in falsehoods. Some parents in Christian America are very careless in this matter. It made my heart ache one day when I saw a lady in a street car trying to keep her little boy awake by telling him that, if he went to sleep, that man who had all those teeth in his window (referring to a dentist's office they had passed) would come into the car and pull every tooth out of his mouth. The little fellow looked up dreadfully scared, and did his best to keep awake: but I thought to myself, when he finds out what a wrong story his mother has told, he will not believe her even when she tells the truth. He will be like a little fellow of whom I heard once, whose mother told him that if he vent to play in a bank from which the men had been drawing sand for a building, a bear would come out and eat him up. One day another boy tried to coax him to go there and play, but he said, no, he was afraid of the bears. The other boy said there were no bears. "But there be bears cause my mother said there be bears." While they were disputing, the minister happened to come along, and they asked him if there were bears in the sand-bank. He told them there were none. "But," said the first little boy, "My mother said there be bears there." "I am sorry she said so," said the minister, "but the truth is, there are none." The child began to cry, and started for home as fast as he could go. "O Mama!" he said, "Did you tell me a wrong story? Did you tell me there be bears down at the sand-bank when there aren't any?" She saw what a dreadful sin she had committed, and she told him that she was sorry; but she was afraid that if he played there he would get buried in the sand, and she told him that to keep him away. "But, Mama, it is such an awful thing to tell a wrong story." "I know it Tommy, I know it," she said, tears coming into her eyes; "and we will ask Jesus to forgive me and I will never do it again." They knelt down, and she was just about to pray when he said, "Wait, Mama, let me ask Him; maybe you won't tell Him truly." That pierced her heart like a dagger. She saw that her little boy had lost confidence in her truthfulness even when she prayed.

THE CHILD HEROINE OF NEW BRUNSWICK

We have read a touching incident about three little children, who, last autumn late in the season, wandered alone in a dreary region of New Brunswick. The sun had already sunk in the west and the gloom of evening was spreading itself over the surrounding country.

The night came on fast; and feeling sure that they could not get home before day break, the eldest (a girl of only six years) quietly placed the two little ones in a sheltered nook on the sea-beach; and fearing the cold chilly night for the younger children, Mary stripped off most of her own clothes to keep them warm....