Children of the Wild 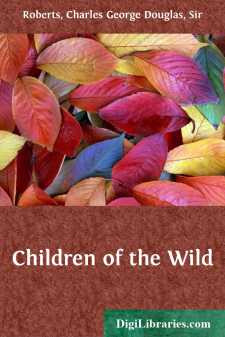 CHAPTER I THE LITTLE FURRY ONES THAT SLIDE DOWN HILL

In the brown, balsam-smelling log cabin on the shores of Silverwater, loveliest and loneliest of wilderness lakes, the Babe's great thirst for information seemed in a fair way to be satisfied. Young as he was, and city-born, the lure of the wild had nevertheless already caught him, and the information that he thirsted for so insatiably was all about the furred or finned or feathered kindreds of the wild. And here by Silverwater, alone with his Uncle Andy and big Bill Pringle, the guide, his natural talent for asking questions was not so firmly discouraged as it was at home.

But even thus early in this adventurous career, this fascinating and never-ending quest of knowledge, the Babe found himself confronted by a most difficult problem. He had to choose between authorities. He had to select between information and information. He had to differentiate for himself between what Bill told him and what his Uncle Andy told him. He was a serious-minded child, who had already passed through that most painful period of doubt as to Santa Claus and the Fairies, and had not yet reached the period of certainty about everything. He was capable of both belief and doubt. So, naturally, he had his difficulties.

Bill certainly knew an astonishing lot about the creatures of the wild. But also, like all guides who are worth their salt, he knew an astonishing lot of things that weren't so. He had imagination, or he would never have done for a guide. When he knew—which was not often—that he did not know a thing, he could put two and two together and make it yield the most extraordinary results. He felt it one of his first duties to be interesting. And above all, he felt it his duty to be infallible. No one could be expected to have implicit faith in a guide who was not infallible. He never acknowledged insufficient information about anything whatever that pertained to the woods and waters. Also he had a very poor opinion of what others might profess to know. He felt convinced that so long as he refrained from any too lively contributions to the science of animal life, no one would be able to discredit him. But he was conscientious in his deductions. He would never have permitted himself to say that blue herons wore gum boots in wading, just because he had happened to find an old gum boot among the reeds by the outlet of the lake, where the herons did most of their fishing. He remembered that that gum boot was one of a pair which had been thrown away by a former visitor to Silverwater.

Uncle Andy, on the other hand, knew that there was an astonishing lot he didn't know about animals, and he didn't hesitate to say so. He was a reformed sportsman, who, after spending a great part of his life in happily killing things all over the earth, had come to the quaint conclusion that most of them were more interesting alive than dead, especially to themselves. He found a kindred spirit in the Babe, whose education, along the lines of maiming cats and sparrows with sling shot or air gun, had been absolutely neglected....