Children and Their Books 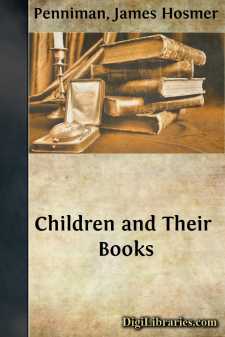 CHILDREN AND THEIR BOOKS

The most vital educational problem will always be how to make the best use of the child's earlier years, not only for the reason that in them many receive their entire school training, but also because, while the power of the child to learn increases with age, his susceptibility to formative influences diminishes, and so rapid is the working of this law that President Eliot thinks that

"the temperament, physical constitution, mental aptitudes, and moral quality of a boy are all well determined by the time he is 18 years old."

Great waste of the child's time and mental energy in the precious early years is caused by disregard of the way in which his mind unfolds. Not only are children set at work for which they are not yet fitted, but frequently they are kept at occupations which are far below what they might profitably engage in. The child should be guided, not driven; to force his mind is an educational crime. Long continued attention and concentration are injurious, but by using tact a great deal may be accomplished without strain.

At first the aim should be not so much to fill the mind with knowledge as to develop the powers as they are ready for it, and to cultivate the ability to use them. The plasticity of the child's mind is such that a new impression may be erased quickly by a newer one; his character receives a decided bent only through repeated impressions of the same kind. The imaginative faculty is one of the earliest to appear, and a weakness of our educational systems is the failure to realize its importance and to pay sufficient attention to its development. It is well known that imagination is the creative power of the mind which gives life to all work, so that without it Newton would never have found the law of gravitation, nor Columbus have discovered America. The world of make-believe is filled with delight for the small child. He loves stories of imaginary adventure that he can act out in his play,

"Now with my little gun I crawl All in the dark along the wall, And follow round the forest track Away behind the sofa back. I see the others far away, As if in fire-lit camp they lay; And I, like to an Indian scout, Around their party prowled about."

Cultivate his imagination by helping the child to image what he has read. Let us play that we are sailing with Columbus in a little ship over the great green ocean. When we look far off from the top of a wave we see nothing but sky and white-capped water; all around us are angry faces and angry waves.

It is easy to work on the emotions of a little child and thoughtless persons may find it amusing but it is a serious matter, for it has an injurious effect upon his nerves. Ghost stories and books which inspire fear of the supernatural often do much harm to imaginative children.

The boundless curiosity of the child may be aroused and stimulated so that he gets to know himself and the world about him in a way that furnishes him with constant and delightful employment. The growth of his mind is rapid and healthful, because he is reaching out to comprehend and verify and apply to his own purposes the knowledge that he derives from books and that which he obtains from observation....