Chester Rand or The New Path to Fortune 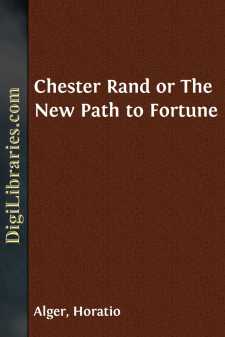 Probably the best known citizen of Wyncombe, a small town nestling among the Pennsylvania mountains, was Silas Tripp. He kept the village store, occasionally entertained travelers, having three spare rooms, was town treasurer, and conspicuous in other local offices.

The store was in the center of the village, nearly opposite the principal church—there were two—and here it was that the townspeople gathered to hear and discuss the news.

Silas Tripp had one assistant, a stout, pleasant-looking boy of fifteen, who looked attractive, despite his well-worn suit. Chester Rand was the son of a widow, who lived in a tiny cottage about fifty rods west of the Presbyterian church, of which, by the way, Silas Tripp was senior deacon, for he was a leader in religious as well as secular affairs.

Chester's father had died of pneumonia about four years before the story commences, leaving his widow the cottage and about two hundred and fifty dollars. This sum little by little had melted, and a month previous the last dollar had been spent for the winter's supply of coal.

Mrs. Rand had earned a small income by plain sewing and binding shoes for a shoe shop in the village, but to her dismay the announcement had just been made that the shop would close through the winter on account of the increased price of leather and overproduction during the year.

"What shall we do, Chester?" she asked, in alarm, when the news came. "We can't live on your salary, and I get very little sewing to do."

"No, mother," said Chester, his own face reflecting her anxiety; "we can't live on three dollars a week."

"I have been earning two dollars by binding shoes," said Mrs. Rand. "It has been hard enough to live on five dollars a week, but I don't know how we can manage on three."

"I'll tell you what I'll do, mother. I'll ask Mr. Tripp to raise my pay to four dollars a week."

"But will he do it? He is a very close man, and always pleading poverty."

"But I happen to know that he has ten thousand dollars invested in Pennsylvania Railroad stock. I overheard him saying so to Mr. Gardner."

"Ten thousand dollars! It seems a fortune!" sighed Mrs. Rand. "Why do some people have so much and others so little?"

"It beats me, mother. But I don't think either of us would exchange places with Silas Tripp with all his money. By the way, mother, Mr. Tripp is a widower. Why don't you set your cap for him?"

Mrs. Rand smiled, as her imagination conjured up the weazened and wrinkled face of the village storekeeper, with his gray hair standing up straight on his head like a natural pompadour.

"If you want Mr. Tripp for a stepfather," she said, "I will see what I can do to ingratiate myself with him."

"No, a thousand times no!" replied Chester, with a shudder. "I'd rather live on one meal a day than have you marry him."

"I agree with you, Chester. We will live for each other, and hope for something to turn up."

"I hope the first thing to turn up will be an increase of salary. To-morrow is New Year's Day, and it will be a good time to ask."

Accordingly, that evening, just as the store was about to close, Chester gathered up courage and said: "Mr....