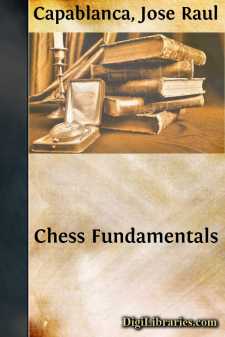 The first thing a student should do, is to familiarise himself with the power of the pieces. This can best be done by learning how to accomplish quickly some of the simple mates.

Example 1.—The ending Rook and King against King.

The principle is to drive the opposing King to the last line on any side of the board.

The combined action of King and Rook is needed to arrive at a position in which mate can be forced. The general principle for a beginner to follow is to

keep his King as much as possible on the same rank, or, as in this case, file, as the opposing King.

When, in this case, the King has been brought to the sixth rank, it is better to place it, not on the same file, but on the one next to it towards the centre.