Chats on Old Lace and Needlework 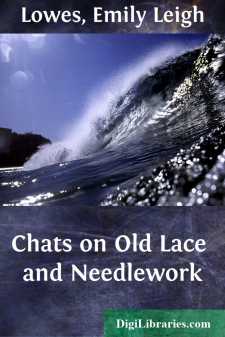 Add to My Favorites
Published: 9 years ago
Downloads: 247
Rating: (0 Votes)

In every other art or craft we can search the history of ages and find some vestiges or beginnings among the earlier civilisations. Possibly owing to the exquisite fragility of Lace, there is a complete absence of data earlier than that of Egypt. The astonishing perfection in art handicrafts of all descriptions which we find in China many hundreds of years before the Christian era shows no vestiges of a manufacture of lace; but, in the tombs of ancient Egypt, garments have been discovered with the edges frayed and twisted into what we may call a primitive lace, and in some of the Coptic embroideries threads have been drawn out at intervals and replaced with those of coloured wools, making an uncouth but striking design. Netting must have been understood, as many of the mummies found at Thebes and elsewhere are discovered wearing a net to hold or bind the hair; and also, a fine network, interspersed with beads, is often discovered laid over the breast, sometimes having delightful little blue porcelain deities strung amongst their meshes.

These early vestiges, however, are in no way representative of the later exquisite fabrics which we now know and recognise as Lace. Far nearer to them, as an art, are the early gold and silver laces of simple design found amongst the tombs of Mycenæ and Etruria, and those of a later date—i.e., the laces of gold used to decorate the vestments of the clergy, and the simple but sumptuous gowns of the Middle Ages. Along with the stole and maniple of St. Cuthbert, which are now at Durham Cathedral, was found a piece of detached gold lace, which must have formed a separate trimming. St. Cuthbert died in 685 A.D., and was buried at Lindisfarne, his body being afterwards transferred to Durham to save it from the desecration of the Danes who were ravaging the land. Over the body was a cloth, or sheet, which was worked in cutworks and fringes, showing that even at so early a date initial efforts at lace-making had been attempted.

As far as we can gather, the earliest endeavour at lace-making originated with the drawing of threads in linen fabrics, then dividing the existing threads into strands, and working over them, in various fanciful designs, either with a buttonhole stitch or simply a wrapping stitch. Exactly this method is used at the present day, and is known as hem-stitching and fine-drawing. A later development suggested, apparently, cutting away of some of the threads, their place being supplied with others placed angularly or in circles. Many delightful examples of the work are to be seen in our Old English samplers of the sixteenth and seventeenth centuries, and even so recently as thirty years ago specimens of this primitive and early lace-making were to be seen in the quaint "smock-frock" of the English farm labourer, a garment which, though discarded by the wearer in favour of the shoddy products of the Wakefield looms, is now deemed worthy of a place in the collector's museum....