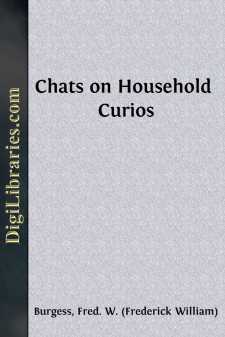 There is a peculiar charm about the relics found in an old home—a home from which many generations of fledglings have flown. As each milestone in family history is passed some once common object of use or ornament is dropped by the way. Such interesting mementoes of past generations accumulate, and in course of time the older ones become curios.

It is to create greater interest in these old-world odds and ends—some of trifling value to an outsider, others of great intrinsic worth—that this book has been written. The love of possession is to some possessors the chief delight; to others knowledge of the original purposes and uses of the objects acquired affords still greater pleasure. My intention has been rather to assist the latter class of collectors than to facilitate the mere assemblage of additional stores of curiosities. It is truly astonishing how rapidly the common uses of even household furnishings and culinary utensils are forgotten when they are superseded by others of more modern type.

The modern art of to-day and the revival of the much older furniture of the past have driven out the household gods of intermediate dates, and it is in that period intervening between the two extremes that most of the household curios reviewed in this work are found. Although many of the finest examples of household curios are now in museums, private collectors often possess exceptional specimens, and sometimes own the most representative groups of those things upon which they have specialized.

The examples in this book have been drawn from various sources. As in "Chats on Old Copper and Brass" (which may almost be regarded as a companion work), the illustrations are taken from photographs of typical museum curios and objects in private collections, or have been specially sketched by my daughter, who has had access to many interesting collections, to the owners of which I am indebted for the illustrations I am able to make use of.

Dr. Hoyle, the Director of the National Museum of Wales, at Cardiff, has most kindly had specially prepared for this work quite a number of photographs of very uncommon household curios. The Curator of the Hull Museum has loaned blocks, and photographs have been sent by Messrs. Egan and Co., Ltd., of Cork; Mr. Wayte, of Edenbridge; and Mr. Phillips, of the Manor House, Hitchin. To Mr. Evans, of Nailsea Court, Somerset, I am indebted for the loan of his unrivalled collection of ancient nutcrackers, some of which have been sketched for reproduction. I have also made use of examples in the collections of private friends, and illustrated some of my own household curios, many of them family relics.

The story of domestic curios is made the more useful by these illustrations, and also by references to well-known collections. There is much to admire in the once common objects of the home, now curios, and it is in the hope that some may be led to appreciate more the antiques with which they are familiar that these pages have been penned. If that is achieved my object will have been accomplished.